Rio 2016 Olympics - Rowing organisers remain confident they can complete the regatta on time though today's rowing was postponed due to rough conditions and tomorrow's forecast is not much better. 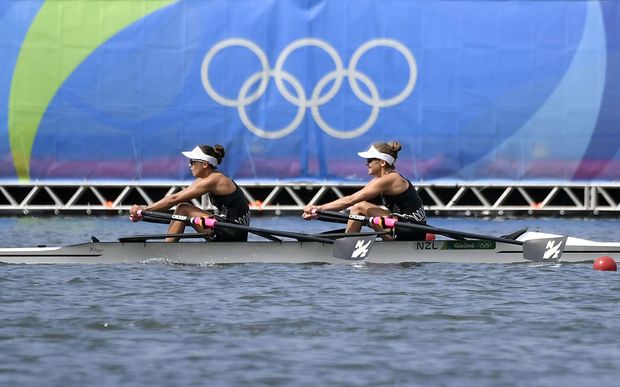 It is the second time racing has had to be cancelled.

Four New Zealand crews had been due to race today. Women's pair Rebecca Scown and Genevieve Behrent were to race in the semi-finals and Julia Edward and Sophie MacKenzie were in the lightweight women's doubles semis. The New Zealand men's and women's eight were contesting repecharges.

The programme will be condensed further with 3 days of the regatta remaining, although they do have an option to go into a fourth.

The weather forecast for tomorrow is for the winds to drop slightly, but it may still be too rough.

One option for the organisers is to not race any of the B or C finals and just race the medal finals.

FISA executive director Matt Smith is not sure about racing tomorrow.

"The forecast for tomorrow is less strong winds than today but (I'm) not particularly optimistic about the forecast. The wind direction is from the hilly side which we experienced on Sunday, but much less strength in the wind.

"We still hold Sunday morning as a reserve day option to see how this plays out. We have already made a plan C or D. I can't remember which plan we're on now - we would use a bit of Saturday afternoon just after the finals - if we lose tomorrow (Thursday) - and be able to finish Saturday with all of the races that are planned and promised to the rowers."

Smith was also asked if they would consider racing a shortened course or ask people to race twice.

"We have the chance to do two sessions on Friday and Saturday, which would mean possibly racing twice in a plan E," he said.

"We reserve that option which would mean Saturday late afternoon racing to catch up if needed.

"A shortened course, like if you were around in Athens in 2003 at our test event, we had a very strong tailwind which caused the second part of the course to be very wavy, and we had the start at the start and the finish at the 1000 (metre mark). That is in the FISA rulebook as an option."

Six New Zealand crews are now scheduled to compete tomorrow with Eric Murray and Hamish Bond in the men's pairs final and the men's lightweight four in their final.

Nice weather for birds but no Rowing today - a new schedule will be released shortly. #rowing pic.twitter.com/RpEdbZhXDp