Rio 2016 Olympics - The New Zealand rowing team has made a formal complaint to Olympic organisers that today's racing at the Rio Games should have been postponed. 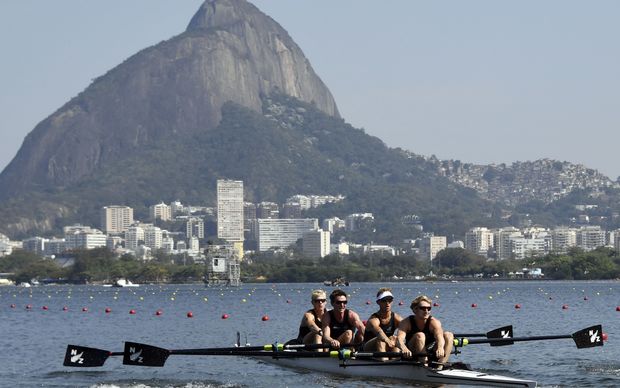 Windy conditions caused many crews to stall in the water, while one boat from Serbia capsized.

"It look really rough, it looked very difficult conditions and when you see boats sinking and people falling out and white caps on the water, in my years competing that was a good sign that... you wouldn't train in those conditions so racing's clearly pushed," he said.

But the rough conditions on the water proved no deterrent for New Zealand's champion rowers, with all but one crew winning their heats at Lagoa.

Single sculler and 2014 world champion, Emma Twigg made easy work of her heat leading all the way, but after the race raised questions about whether the heats should have gone ahead in such choppy water.

"I've spoken to a lot of people in the boat park and they're as disappointed as I am. At what point is it for the athletes? That's a question for FISA (International Rowing Federation) and no doubt the team managers will be putting [that] tonight."

Despite the conditions, champion sculler Mahe Drysdale, defending his Olympic gold, easily finished first in his heat and the pairs powerhouse of Hamish Bond and Eric Murray also cruised to the finish line.

"If I could give an educational likeness, it's probably like walking down some stairs and when you're mid-stride the step gets three times the height. You go to take a step and you're taking three steps all at once. Or maybe skiing with a blindfold on."

In the double sculls, the world champion pair of Eve McFarlane and Zoe Stephenson got off to a terrible start, trailing the field for the first half of the race, but in an impressive display of composure picked up the pace to cross the line first.

In the men's pair Chris Harris and Robbie Mason were forced into a tight tussle with an Azerbeyjan crew, before winning by the narrowest of margins.

The men's lightweight four of Curtis Rapley, James Lassche, James Hunter and Alistair Bond also cleaned up in their heat.

The men's quad, a late entry into the New Zealand team in June after the disqualification of some Russian athletes, come fourth in their heat and now go to a repechage.

The first three from each of six heats advance to the quarter-finals.