New Zealand's Hayden Paddon has held on to third position in treacherous conditions at the World Rally Championships latest round in Poland. 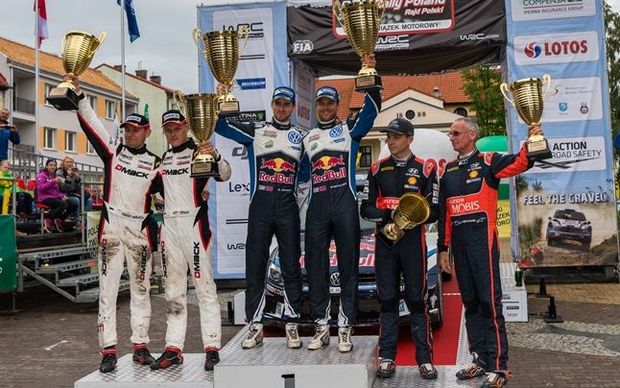 Hayden Paddon and John Kennard on the podium after a third finish at Rally Poland. Photo: Supplied

The Hyundai driver had three fifth and one sixth place finish on the final day's four stages.

The rally was won by Norway's Andreas Mikkelsen.

Paddon is now third in the overall WRC drivers standings, heading into the next rally in Finland.

It is the New Zealanders fourth-ever podium finish and a very close finish with just 3.1 seconds separating Ott Tanak in second, Paddon in third and Paddon's Hyundai team-mate Thierry Neuville in fourth.

Paddon said it was a little too close for comfort and he struggled in the conditions.

"The rain made the stages very slippery and I had no confidence at all. Our objective today was to secure third position rather than push for second, so we wanted to be relaxed. I think we probably eased off too much."

Paddon is happy with the result, which has allowed he and co-driver John Kennard to bounce back after two tough results.