Wales have had the worst possible dress rehearsal for the second test against the All Blacks, humbled 40-7 by the Chiefs in Hamilton. 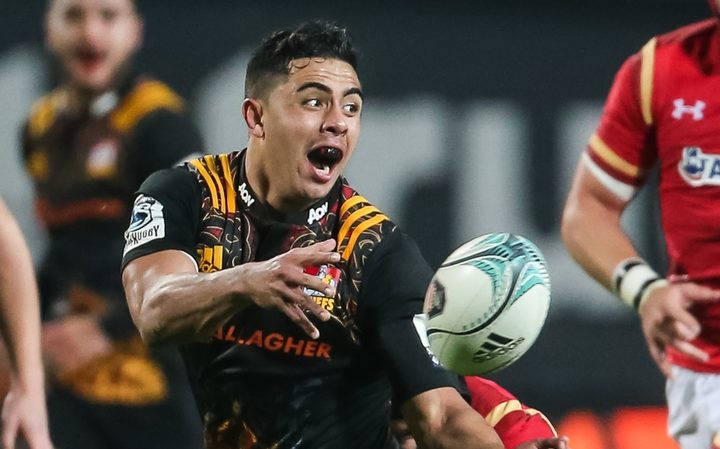 Chiefs centre Anton Lienert-Brown gets a pass away during the match against Wales in Hamilton. Photo: PHOTOSPORT

The Super Rugby side ran in six tries to one on Tuesday night - in a match that Wales had been hoping would reinvigorate their tour after the first test loss in Auckland.

Wales had the better of territory and possession throughout the match but simply couldn't covert it into points.

The Chiefs, on the other hand, despite losing eight first-choice players to international duty with the All Blacks, made the most of their opportunities.

Halfback Brad Webber opened the scoring seven minutes into the first half. The Chiefs stole possession from a Wales line-out, and Stephen "Beaver" Donald sliced through the Welsh defensive line - offloading the ball for Webber to dart over. Donald added the conversion.

The Chiefs added a second try through number eight Tom Sanders, who crashed over after the Chiefs had strung together 17 phases of play.

Donald again added the conversion, bringing the score to 14-nil.

The returned veteran continued to play a leading hand in the match. Just three minutes from halftime, he appeared to cross the line - but, with no clear grounding, the television match official was unable to award the try.

It didn't slow the Chiefs down, however. From the ensuing scrum, Chiefs lock Dominic Bird crashed over to help the home side to a 21-nil lead at halftime.

Second half try for Wales

Wales test skipper Sam Warburton was a late inclusion in the starting line-up but his presence couldn't inspire the tourists. The team managed to work their way into good scoring opportunities but failed to covert that into points, coughing up the ball at key moments.

They initially looked to play an expansive game but, as the score mounted, they reverted to type, keeping the ball much tighter among the forwards.

That only seemed to play into the Chiefs' hands, as they were well organised defensively.

Wales finally got on the scoreboard 15 minutes into the second half. Replacement hooker Christian Dacey was herded over the line to score from a Welsh line-out drive, taking the score to 21-7.

The try gave Wales a renewed burst of energy but it wasn't enough to concoct another try, as the Chiefs' defence held.

Wales only found themselves in deeper trouble when the Chiefs managed to escape their own half.

Home team fullback James Lowe, who took on the Welsh line throughout the match, scored the Chiefs' fourth try to make it 28-7, again with Donald's conversion.

That was the final act of the night for Donald, the hero of the 2011 Rugby World Cup final.

A standing ovation from the Hamilton crowd greeted him as he left the field, five years after his last run in a starting line-up for the Chiefs.

The Chiefs then added to Wales' woes with two more tries in the final five minutes to wingers Tony Pulu and Sam McNichol, with the home side running out to a winning final score of 40-7.

Wales captain Luke Charteris said the Chiefs were just too "clinical", and gave the tourists a lesson on how to play the game.

The loss is the biggest by a Welsh touring side to a New Zealand provincial side, surpassing the 27-7 loss to Northland in 1988.