European football's governing body has warned the English and Russian associations that their teams could be disqualified from Euro 2016 if there is a continuation of the fan violence that has injured several dozen people. 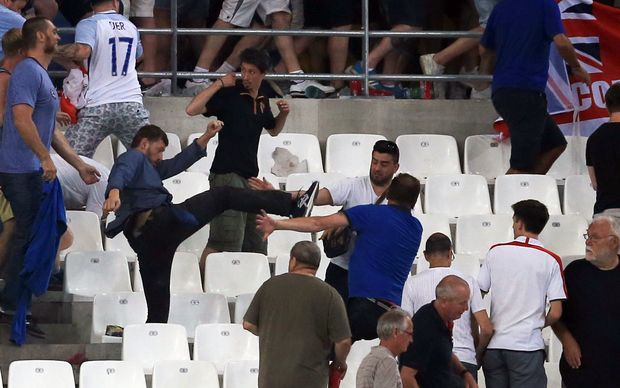 UEFA's threat came after it began disciplinary proceedings against the Russian federation following ugly scenes inside Marseille's Stade Velodrome stadium at the end of yesterday's match between England and Russia.

Masked Russian fans charged at England supporters, punching and kicking them. Some England fans had to scramble over barriers to escape.

UEFA said that it would also investigate allegations of racist behaviour and the throwing of missiles and fireworks.

The violence in the stadium followed three days of clashes between English, Russian and French fans in the Mediterranean port city of Marseille, drawing a strong response from riot police.

UEFA said it was "disgusted" and would not hesitate to impose sanctions, including "the potential disqualification of their respective teams from the tournament, should such violence occur again".

"This kind of behaviour is totally unacceptable and has no place in football," UEFA said, adding that a decision on sanctions against Russia would be made within days.

English and Russian fans will almost certainly cross paths in Lille later this week, with Russia playing Slovakia in the city on Thursday and England facing Wales only 40 km (25 miles) away in Lens on Friday (NZT).

Russian Sports Minister Vitaly Mutko, who had initially denied that there had been any crowd disturbance, said that UEFA was right to investigate.

It is the second time in as many European Championship tournaments that the Russian federation has faced sanctions because of its fans.

Russia was fined and given a suspended six-point deduction for its Euro 2016 qualifying campaign after fans assaulted stadium security staff and displayed illicit banners at the 2012 tournament in Poland and Ukraine.

The British government urged calm on all sides and offered to send more police to France ahead of England's next game.

Violence also briefly erupted in Nice, where Northern Irish and local fans hurled glass bottles and chairs at each other late on Sunday.

The French government rallied behind the police amid questions over tactics and security inside the stadiums.

A UEFA spokesman said that more security personnel would be deployed to segregate rival fans inside stadiums.

The tournament is being played under a state of emergency after Islamist militants attacked Paris in November, killing 130 people.

In Marseille, some English fans suggested that French riot police had been heavy handed and quick to fire tear gas. Thirty-five people were hurt in the fighting, including one English fan who suffered a heart attack.

In 2000 UEFA threatened to kick England out of the tournament after violence broke out between English and German fans in the Belgian cities of Brussels and Charleroi.

France has enlisted more than 90,000 police, soldiers and private security agents nationwide to ensure safety in the face of intelligence agency warnings of potential militant attacks and the threat of hooliganism.