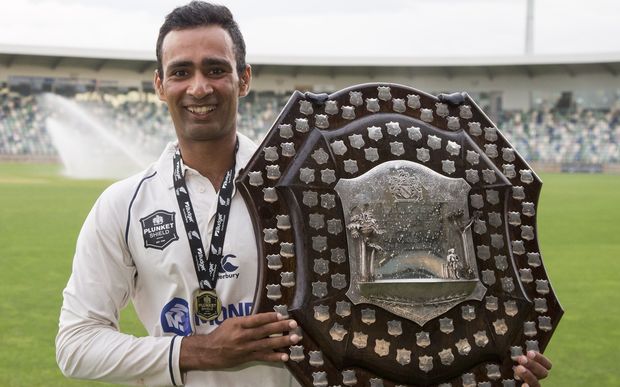 The Auckland batsman Jeet Raval is the sole new cap in the New Zealand cricket side named for the upcoming tour of Zimbabwe and South Africa.

The side will play two Tests in Harare against Zimbabwe and two against South Africa in Durban and Centurion.

The 27-year-old left hander has been a consistent performer at the top of the order in the domestic four-day competition, with a first-class career average of 43.85.

In the 2015-16 season he averaged 55.71, making three centuries and helping Auckland to the Plunket Shield title.

He'll be joined by leg spinner Ish Sodhi, who returns to the Test squad after last playing for the side in 2014.

Sodhi joins Mark Craig and Mitchell Santner, to give the side three frontline spin options.

Coach Mike Hesson said Raval has performed well for New Zealand A and deserved his call up to the Test side, while Sodhi returns to the squad after playing his last Test in 2014.

"Ish was outstanding in all formats during the second half of last season, beginning with his performances in the Plunket Shield for Northern Districts.

He was also exceptional for us with the white ball last summer and that's seen him gain valuable confidence on the international stage."

Hesson also pointed to the conditions as to how the balance of the squad was decided.

"Having played in both Zimbabwe and South Africa last year, we have some insight into what the pitches could be like this time around and we've selected our squad accordingly.

"Playing two Tests in Harare, we need to be prepared for dry turning surfaces, but also know that Durban often has a good covering of grass."

The first Test on the tour is against Zimbabwe starting on July 29th.