His country's captain, Simon Mannering, is also in doubt after the Warriors' 42-0 humiliation in Monday night's NRL game in Melbourne. 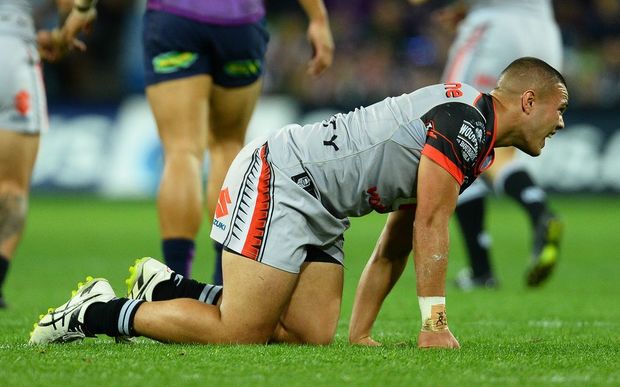 Tuimoala Lolohea after his knee injury in Melbourne Photo: Photosport

Fullback Lolohea limped off in the Storm defeat, while Mannering, a forward, had to be taken to hospital with a severe cut to his mouth. He has been ruled out of the Warriors' next game at home against St George Illawarra on Sunday, and his club has said he'll be out for one or two weeks.

Kiwis coach Stephen Kearney was resigned to adding Lolohea to the injured list, which included another fullback option in Roger Tuivasa-Sheck, who is out for the season with a serious knee injury.

However, Kearney believed they had cover for Tuivasa-Sheck and Lolohea, as well as for Mannering - if he isn't cleared to play.

"At this stage, the report back on young Tuimoala - he's out for three to four weeks," Kearney said.

"And Simon, we're just waiting to hear back, I think he's seeing a specialist when he gets back into Auckland from Melbourne." 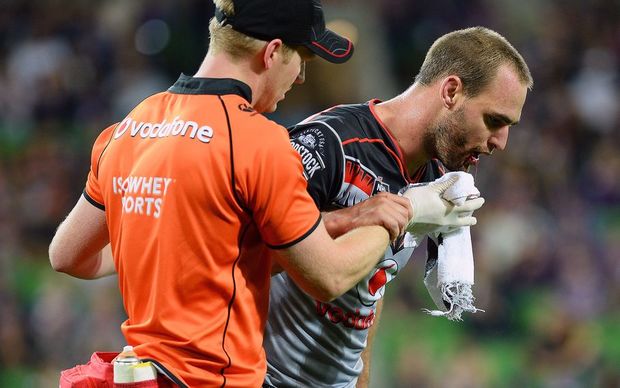 Simon Mannering leaves the field with a severe cut to his mouth Photo: Photosport

Peta Hiku and Jordan Kahu were two candidates to play fullback against the Kangaroos, Kearney said.

Brisbane forward Adam Blair, meanwhile, won't miss the Test despite being charged with dangerous contact in his NRL game.

Kearney will leave naming his squad until Sunday at the latest, while his opposite number, Mal Meninga, named his squad on Tuesday.

The Australian team includes the now-former Fiji representative Semi Radradra of Parramatta, who last played for the nation of his birth in 2014.

While Kearney said the eligibility rules were just the rules, he threw a barb at Meninga for denying an Australian-born player the chance to represent his country.

"That's how the rules are - do I think they're right? The rules say that he can play for Australia," Kearney said.

"I guess what I would say is, I would be a little bit disappointed if I was born in Australia and playing in one of those positions and then I don't get picked, and I've done the job for Australia before."