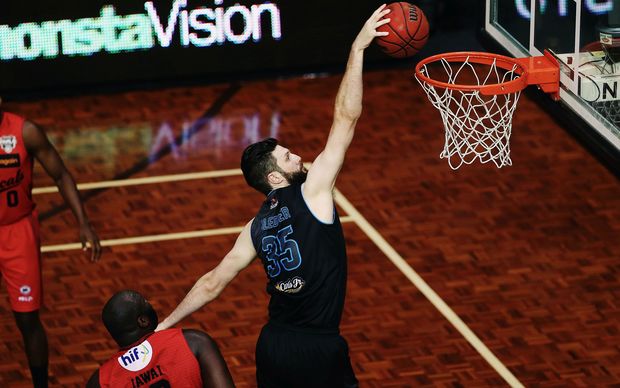 Alex Pledger of the Breakers with a dunk down the lane during the ANBL Grand Final game against the Perth Wildcats. Photo: PhotoSport

Pledger has committed to a three year deal with the club, one that will see him join long term team mates Mika Vukona, Tom Abercrombie and Corey Webster in forming the spine of a roster that Head Coach Paul Henare knows will be contending for another championship in the expanding NBL competition.

"Alex will play a huge part in our fortunes over the next three years, he was the only big I was after, he knows this club, lives and breathes our values and will only go on to dominate even more with a strong off-season under his belt. He is the sort of player we can build a team around, I am delighted to announce his signing in the face of fierce opposition for his signature, we don't take anyone for granted at this club, let alone 'the Chief'," said Henare.

Pledger spoke of his delight in securing his immediate future, a decision that was made with other offers on the table, but one that was made for him when a coin toss came down the 'wrong' way.

"The key for me in committing to a new deal was having Dillon and Pauli on board as GM and Head Coach, it feels to me like there is a renewed energy at the club, which is something I am keen to be a part of.

"I admit though to sitting on the fence for a few days wondering what I was doing, Bailee (Alex's partner) said to me 'flip a coin' - heads for breakers, tails for another team - and there were others chasing pretty hard. The coin landed on the 'other team' and I immediately wished it hadn't. I guess I kind of knew and put myself through that as a little test and while a coin toss was never going to be the final decision maker, it was a strong message and told me in my head where I should be.

"With the leadership of Pauli and Dillon and having Mika, Tom and Corey already under contract - that was another clincher, they are three guys I have played with a long time with and am familiar with. Funnily enough I have never played for Pauli before as Head Coach, I know him as an assistant but I have heard nothing but good things about him as a Head Coach and I want to know what that is like first hand."

"I think my best years and best basketball are in front of me. I have had to put some of that improvement on hold the past two seasons, now I am fully healthy and have spent the last six months getting back to my previous levels, now I am close to that the next step is to continue to evolve as a player and get beyond those levels. I am in my prime years, I am not too old, nor have I reached my peak. Look at guys like Mika, they continue to improve well into their thirties when some think they might be slowing down. I am almost in my thirties but see no reason as to why I won't also continue to improve and get better with age.

"Ultimately it came down to the Breakers is home for me, it would not be easy to leave a club that has given me so much."

29 year old Pledger will meanwhile continue his off-season in the New Zealand NBL with the Southland Sharks and assemble with the Breakers for pre-season training in August.