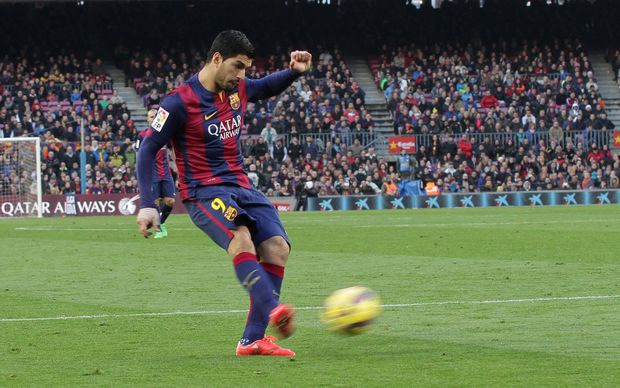 Barcelona's Luis Suarez netted twice for a 2-1 win over 10-man Atletico Madrid after the visitors' Fernando Torres opened the scoring and was later sent off.

After a flurry of chances for the home side, Suarez levelled from close range in the 63rd minute and then headed the winner in the 74th, giving the European champions the edge before next week's second leg at the Vicente Calderon.

Atletico got off to the ideal start when Torres fired Koke's pass through the legs of keeper Marc-Andre ter Stegen after 25 minutes but 10 minutes later he was dismissed for a second booking as they suffered a seventh straight loss to Barca.

Bayern Munich will take a slender advantage into their second leg against Benfica after Arturo Vidal's early goal gave them a 1-0 home win.

Vidal headed home after two minutes but Benfica's defence stayed resolute on a frustrating evening for the hosts.

Five-times European champions Bayern had found goals easy to come by in the Champions League this season, blasting 18 in their four home matches, but came up against a solid Benfica rearguard as they pushed to extend their advantage.

Bayern striker Robert Lewandowski had a superb chance to add a second in the dying stages but bizarrely opted to try and pass to Philipp Lahm when through on goal and the chance was wasted.