The Central Pulse mixed outstanding defence with composed shooting to nail a gritty 57-56 win over Waikato-Bay of Plenty Magic in their trans-Tasman netball league clash in Wellington. 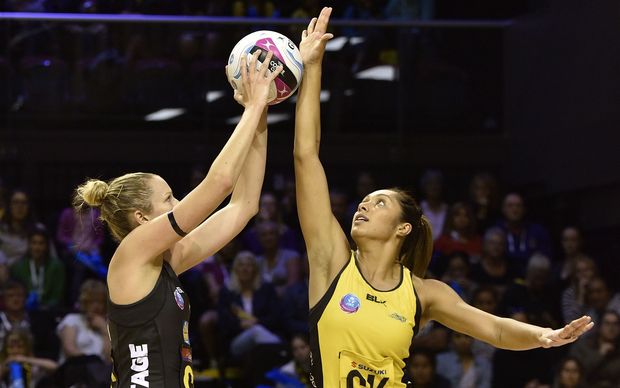 With just 10 seconds on the clock, the Magic looked poised to level the scores when goal keep Kristiana Manu'a grabbed a key intercept.

But shooter Jo Harten missed an easy penalty shot at the other end, Pulse keeper Phoenix Karaka snaffled the rebound and the Pulse held on for the win.

There was plenty for new Pulse coach Tanya Dearns to be happy about, particularly in her shooting circle which is still reeling from the loss of former Silver Fern Jodi Brown to a career-ending knee injury.

Youngster Maia Wilson was always composed at the back, the 18-year-old former national basketball rep looking increasingly confident in her combination with goal attack Ameliaranne Wells.

She finished with solid figures of 34 from 38 for the match, impressing with some sharp movement, a strong hold and an uncanny ability to create space.

Wells showed excellent timing in her work up-court and to the circle edge, and solid accuracy in landing 23 of her 27 attempts.

The Pulse's two new Australian signings, wing attack Chelsea Locke and wing defence Jacinta Messer, were clinical in shifting the ball through court and centre Elia Scheres was outstanding despite dislocating a finger in the second quarter.

Ahead 16-15 at the first break, and 29-26 at halftime, the Pulse faltered in the third quarter and the Magic pounced.

Kristiana Manu'a shifted back to goal keep while Katherine Coffin took over at goal defence, and midcourters Courtney Tairi and Sam Sinclair started finding Harten (34 from 30) and Malia Paseka (17 from 20) with more consistency.

But although the visitors eked out a four-goal lead, the Pulse finished on a six-goal run and led 43-41 at the last break.

The unflappable Ellen Halpenny replaced Paseka at the three-quarter mark, and although the Magic looked set to launch a winning run when they levelled the scores early, the Pulse proved steadier in the hectic final minutes.