World golf No.1 Lydia Ko has run away with victory at the latest event on the LPGA tour in California. 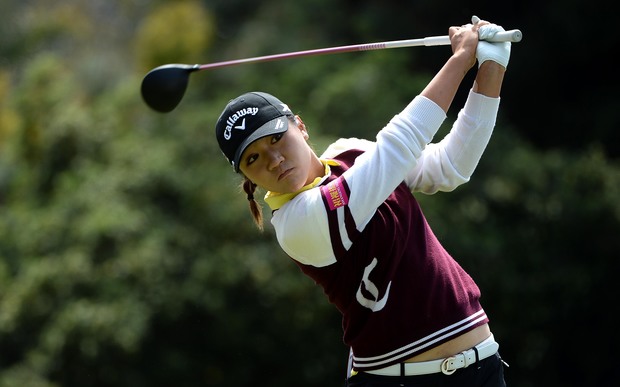 Lydia Ko tees off the second hole during the final round at the Aviara Resort in Carlsbad, California. Photo: AFP

The New Zealander carded seven birdies in her final round at Carlsbad to win by four strokes, beating world number two Park Inbee.

The 18-year-old only struck three bogies throughout the tournament, two of them coming in her final round, before stringing three birdies together over the last three holes.

It was the third day in a row Ko had carded a five under par of 67 at the Aviara Resort course, for a final score of 19 under par for the tournament.

As she struck the ball, it popped almost straight up and hit the shaft of her putter, near the top of the hosel, before trickling forward onto the green.

Ko took the mandatory one-stroke penalty for a bogey which she backed up with five pars.

Park climbed from fifth to second with a 67 of her own on Monday and reduced Ko's advantage to just one stroke before the teenager finished with her three birdy flourish.

After rounds one and two Ko trailed the lead by one stroke, but broke away from the pack on the third day by three strokes.

The victory was her 11th on the LPGA tour and her first this season.

"I started off really well. I was able to make birdies on one and two, and then I peeked at the leaderboard and saw Inbee was making a lot of birdies," Ko said.

"I knew that I needed to focus up until the last moment and fortunately I made some birdies down the stretch."

Ko said the win would give her confidence heading into the season's first major tournament in California's Mission Hills.

"Who knows what's going to happen tomorrow, but I've been playing consistently well so I'm really happy with that.