Australia survived another middle-order collapse to beat Bangladesh by three wickets to get their World Twenty20 campaign up and running. 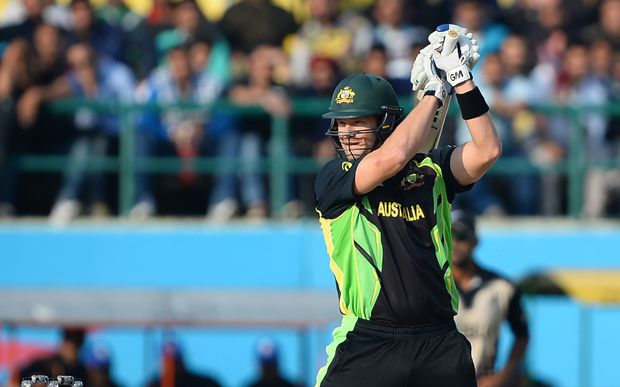 Shane Watson in action at the World T20 in India. Photo: PhotoSport

Both teams were looking to bounce back from losing their opening Group Two games, Australia skipper Steve Smith winning the toss and choosing to field.

Smith's men picked up wickets at regular intervals to restrict Bangladesh to a modest 156 for five despite a late flurry by Mahmudullah who hit seven fours in an unbeaten 49.

Openers Usman Khawaja (58) and Watson (21) then got Australia off to a good start, sharing a stand of 62 in 44 deliveries before the latter was run out.

Khawaja was bowled by Al-Amin Hossain in the 14th over having struck seven fours and a six in a 45-ball knock that gave Australia a solid platform, although they had the same sort of middle-order slump they suffered in the first game against New Zealand.

Smith, out for six against the Kiwis, was bowled by Mustafizur Rahman for 14.

David Warner (17) was next to fall and was soon followed by Mitchell Marsh (six).

Glenn Maxwell then scored a brisk 26 before being stumped by Mushfiqur Rahim off left-arm spinner Shakib Al Hasan.

All-rounder John Hastings, brought in by Australia for left-arm spinner Ashton Agar, was dropped on nought by Hossain and finally went for three when he was caught at mid-wicket by Soumya Sarkar.

By then Australia needed five runs off the last two overs and James Faulkner and Peter Nevill saw them through to a far-from-convincing win that lifted them to third in the group behind New Zealand and Pakistan but ahead of India.

Bangladesh, who are bottom, have a mountain to climb to reach the semi-finals. (Reporting by Simon Jennings; Editing by Tony Jimenez)