India have bounced back from their shock opening defeat by New Zealand to beat Pakistan by six wickets this morning to revive their World Twenty20 cricket campaign. 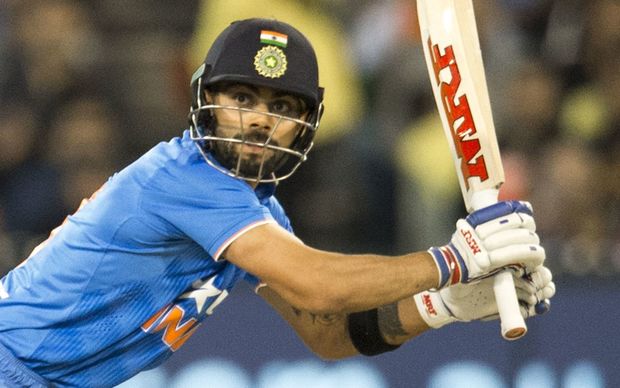 Virat Kohli helped India survive a top-order collapse in a tight game and maintain their impeccable World Cup record against their arch-rivals.

Kohli's magnificent 55 not out was the difference between the sides in the rain-hit 18-overs-a-side match, coming under tremendous pressure on a prodigiously turning track at Eden Gardens in Kolkata.

Chasing 119 to secure their first win of the tournament, India slumped to 23-3 in the fifth over before Kohli and Yuvraj Singh (24) shared a match-high 61-run partnership to virtually take the game away from Pakistan.

Home captain Mahendra Singh Dhoni smashed a six to level the scores and took a single to seal victory with 13 balls to spare.

Pakistan, put into bat, found the going difficult, especially against India's slow bowlers as they scored 118-5.

Openers Sharjeel Khan (17) and Ahmed Shehzad (25) were subdued by the Indian bowlers and Shahid Afridi could not justify his promotion to number three.

Shoaib Malik (26) and Umar Akmal (22) added 41 runs in four overs to take Pakistan past the 100-mark to ensure their pace-heavy attack had something to defend.

The match between the winners of the first two editions of the tournament was originally scheduled in the picturesque north Indian city of Dharamsala before Pakistan's security fears led to it being moved to Kolkata.

Meanwhile, two of Bangladesh's bowlers have been suspended from bowling in international cricket after the ICC found the actions of Arafat Sunny and Taskin Ahmed to be illegal.

The team may apply to replace the two bowlers for the remainder of the World Twenty20 cricket campaign.