The Indian media has heavily criticised the home side in the wake of their shock first up loss to New Zealand in the Twenty20 cricket world cup in India.

Batting first New Zealand made just 126 for 7 from their 20 overs, a total that looked unlikely to be enough on a spinner friendly Nagpur wicket. 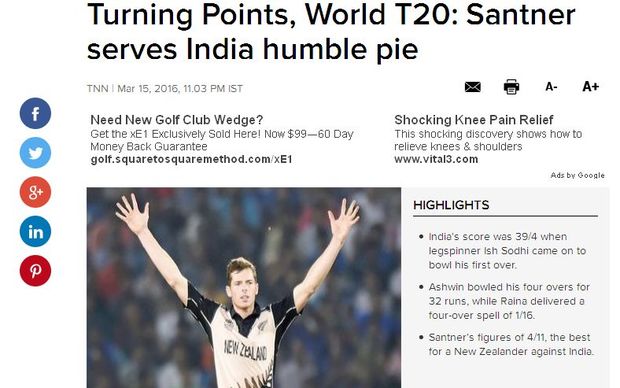 Reaction in the Times of India to New Zealand's win. Photo: Supplied

But the decision to leave out pace bowlers Tim Southee and Trent Boult and include off spinner Nathan McCullum, left armer Mitchell Santner and leg spinner Ish Sodhi was a "masterstroke" said the Times of India as India was reduced to 43-7 in the eleventh over and eventually all out for 79.

The newspaper labelled the home side's batting effort as "feeble".

The Indian Express said the New Zealand spinners "teased, taunted and suffocated" the home side.

"Whatever you feel about this loss as fan of India, there couldn't have been more thrilling way to start the main draw of the World Cup. Now the cat is flung and howling among the pigeons."

"If there was any plan to prepare turners for India - whether it was done at team's behest or independently is beside the point...." 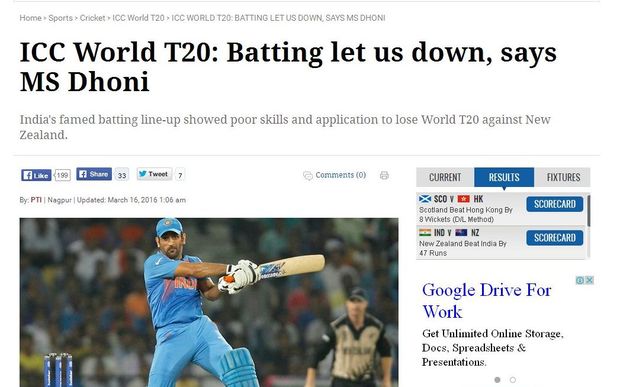 Reaction to the Black Caps win in the Indian Express Photo: Supplied

The Hindu Star said India had been "humiliated" and the selection of three spinners enabled New Zealand to "outwit" the home side.

New Zealand have now won all five of their Twenty20 matches against India, who are the world's top ranked side having won their last seven games.

Mitchell Santner was the most successful of the bolwers taking 4-11.