The former World tennis number one Maria Sharapova has been provisionally suspended from the sport after failing a a drugs test at the Australian Open in January.

The 28-year-old Russian, a five-time grand slam champion, tested positive for meldonium, which is used to treat diabetes and low magnesium, and was only banned by the World Anti-Doping Agency at the start of the year.

The International Tennis Federation says Sharapova had provided an anti-doping sample at the Australian Open that had been analysed by a WADA-accredited laboratory, which returned a positive for meldonium - a prohibited substance. 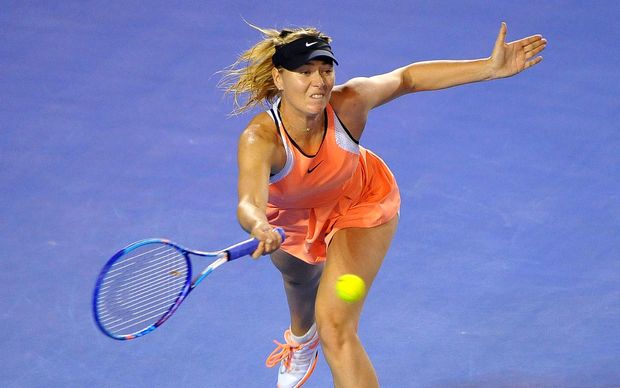 Maria Sharapova has been suspended by the ITF following her positive drug test. Photo: Photosport

Meldonium is used to treat chest pain and heart attacks, but some researchers have linked it to increased athletic performance and endurance.

It is not approved in the United States but is available in Russia, Latvia and other countries in the region.

The suspension will take effect from Saturday, March 12th.

Sharapova told a media conference in Los Angeles on Tuesday she took full responsibility for using the drug.

"For the past 10 years, I have been given a medicine called mildronate by my family doctor and it also has another name of meldonium, which I did not know.

"It is very important for you to understand that for 10 years this medicine was not on WADA's banned list and I had been legally taking the medicine. But on January the first, the rules have changed and meldonium became a prohibited substance."

"I made a huge mistake. I let my fans down and I let the sport down. I have been playing since the age of four a sport that I love so deeply," said Sharapova, a teenage tennis prodigy who became the third-youngest Wimbledon champion.

"I know that with this I face consequences and I don't want to end my career this way. I really hope that I will be given another chance to play this game."

Sharapova, who has struggled with a series of injuries in recent years, has not competed since she lost to Serena Williams in the quarter-finals of the Australian Open in January.

"I was first given this medicine by my doctor for several health issues I was having back in 2006," said Sharapova, who according to Forbes earned $43 million in 2015.

"I had a deficiency in magnesium and a family history of diabetes, and there were signs of diabetes. That is one of the medications, along with others, that I received."