The New Zealand captain Brendon McCullum has set the record for the fastest ever Test century in his final international match. 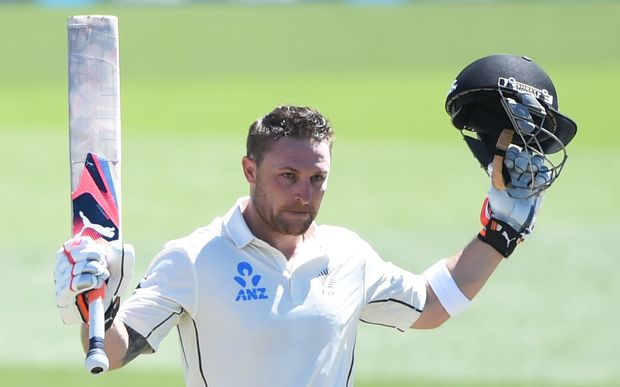 McCullum reached three figures in 54 balls in Christchurch on Saturday, bettering the previous mark of 56 deliveries held by Viv Richards and Misbah-ul-Haq.

Australia had few answers as McCullum marched to the milestone in 79 minutes.

He cracked four sixes and 16 fours to post his second Test ton against Australia.

The 34-year-old brought up the record with a fourth consecutive boundary, charging down the wicket and slapping a ball from Josh Hazlewood over the covers.

The knock was all the more astonishing given how much the ball was doing on a lively green pitch, with McCullum walking out after a collapse of 11 for 3.

His only chance came on 39, when Mitch Marsh plucked a brilliant one-handed catch at gully.

McCullum received a standing ovation from the sold-out crowd at Hagley Oval and was given a guard of honour by Australia when his innings started. 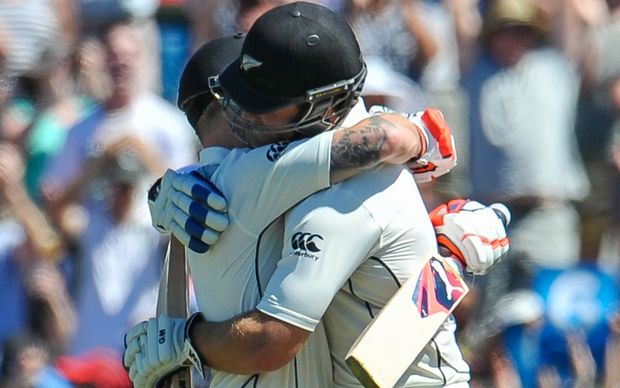 The Black Caps skipper was eventually dismissed for 145 off 79 balls, caught in the deep by Nathan Lyon from the bowling of James Pattinson.

Coupled with knocks of 72 from Anderson and 58 from BJ Watling, the hosts made a mockery of a wet, green seamer that both skippers were desperate to bowl on.

The 179-run stand between sluggers McCullum and Anderson came at 9.76 runs an over.

No other stand worth 150 or more runs has ever been scored at such a clip in the history of Test cricket.

The Black Caps were all out shortly after tea for 370 off just 65 overs and four balls.

In reply, the tourists were 57 for one at stumps on Saturday, with David Warner out for 12, caught at slip off Trent Boult.

Joe Burns and Usman Khawaja did well to see off the new ball and nullify New Zealand's four-prong pace attack in an unbeaten 32-run stand.

But the visitors have a mountain of work to do on day two.

A guard of honour from the Australian cricketers welcomed McCullum to the crease in his final match, but it was the only welcoming gesture from the tourists in the opening session. 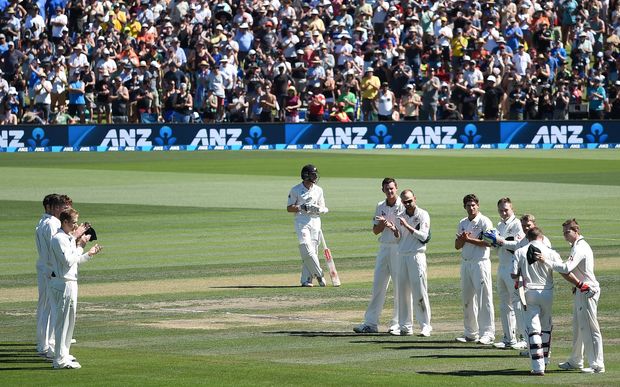 Retiring NZ Captain Brendon McCullum comes to the wicket with a guard of honour. Photo: PHOTOSPORT

The cricketing gods again failed to smile on McCullum as his luckless run with the toss continued.

When Australia skipper Steve Smith correctly called heads he had no hesitation in opting to bowl under clear blue skies and on a juicy Hagley Oval pitch.

Fast bowler Pattinson, in for the injured Peter Siddle, immediately found a searching line and length causing all sorts of problems for the New Zealand batsman before taking the first wicket, that of Martin Guptill for 18, to have New Zealand 21-1. 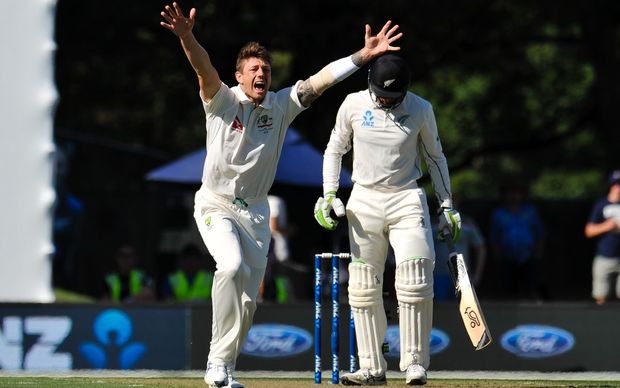 The Australian bowlers continued to pin down the New Zealand batsmen, with Tom Latham the next to go having batted for an hour and ten minutes for just four.

Smith took a diving one handed catch at second slip off the bowling of Jackson Bird and New Zealand were 23 for two.

Kane Williamson and Henry Nicholls continued to get a working over, with Williamson sure to have a few bruises after getting struck on the inner thigh several times with the ball nipping back off the seam.

On seven Henry Nicholls was adjudged lbw to Josh Hazelwood. He sought a DRS review but to no avail and New Zealand slumped to 28 for three.

That brought McCullum to the wicket and the full house at Hagley Oval to their feet as they applauded him all the way to the wicket. 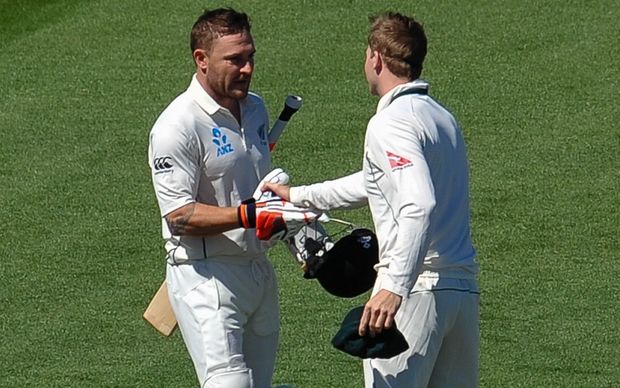 A searching first-up delivery from Hazelwood whizzed past McCullum outside off stump.

The following ball McCullum agriculturally tried to deposit Hazelwood over mid-wicket only to snick it past the wicketkeeper for four.

There was going to be no poking and prodding from McCullum. First ball from Mitchell Marsh he struck back over his head for six.

Before the over was out Marsh went for another six and two fours.

At lunch McCullum had moved through to 37 off just 18 balls while Williamson had faced 64 deliveries for eight with the Black Caps 74 for three.

The Australians lead the series 1-0 and can go to the top of the world Test rankings if they draw or win.