Australia's pacemen are cherishing the prospect of a lively wicket in Wellington after a summer of pancake pitches. 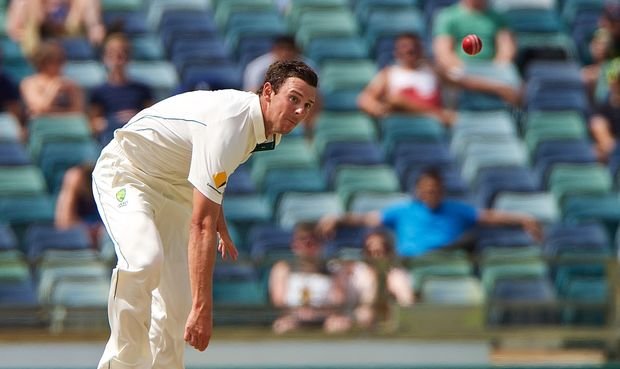 Much has been made of Australia's batting deficiencies when it comes to swing and seam movement ahead of the trans-Tasman Test cricket series that starts on Friday.

Spearhead Josh Hazlewood preferred to see the upside of the grassy strip at the Basin Reserve, where it was more than five years since a side have won the toss and batted in a Test.

"It does (excite the pacemen). We don't get that that often in Australia anymore," Hazlewood said.

"It's good to come over here and, hopefully, they do suit us bowlers and there's an even contest between bat and ball."

The ground is well-regarded by New Zealand fast bowlers because no other deck in the land of the long white cloud has as much pace and bounce in it.

It's a source of confidence for Hazlewood, as was the recent three-Test series at home that Australia won 2-0.

"Our bowlers really suit these conditions so, hopefully, we start well and stay on top of them as we did in those three Tests," the 25-year-old said.

Martin Guptill continued his trans-Tasman struggles in that series, averaging 13.66 as his overall Test average against Australia dropped to 16.

Hazlewood was well aware of that statistic, having dismissed the opener three times this summer.

"He's quite confident in limited-overs games... but I think he's still a bit uncertain in the Test arena," Hazlewood said.

"We'll be looking to exploit that again and stay on top of him, as we've done in Australia."

The leader of the New Zealand attack Tim Southee fired back, pointing out Australia's lack of local experience.

"It's probably been a while since a side's come to New Zealand without having any experience of playing Test cricket here," Southee said.

"It's something foreign for them and I guess there is a slight edge there."

Wednesday was the first day Australia's entire Test squad trained together since crossing the ditch.

No member of the touring party was surprised with the state of the pitch, which was often under covers as the sun belted down.

"It's one of the ones out there," vice-captain David Warner quipped, referencing a well-grassed wicket block that was largely the same colour as the outfield.

"Most of the batters want to be bowlers looking at that wicket."

However, appearances can be deceiving.

"It looks nice and green but that's irrelevant. I don't think the ball will do much off the wicket," Warner predicted.

"The swing is the factor."