Disgraced Sydney Roosters co-skipper Mitchell Pearce has apologised and admitted he has a problem with alcohol which he needs to address.

A clearly shaken Pearce fronted reporters briefly on Friday in the wake of his disturbing drunk and lewd behaviour at an Australia Day party which was captured on video and sold to media.

Pearce's actions included simulating a sex act with a dog at a private residence, and allegedly urinating on himself and a couch.

Pearce did not take questions from reporters but said he was sorry, and he unreservedly apologised.

"My behaviour was unacceptable, I'm embarrassed and take full responsibility for my actions," Pearce said.

"I acknowledge that I have a problem with alcohol and it's something I need to address... It's not an excuse but a realisation that I finally need help."

"Together with the club I'm working on a solution to address these issues and it will come out in the next couple of days."

It was the second time in less than two years that the 26-year-old New South Wales Origin halfback was forced to publicly apologise after embarrassing himself and the game while influenced by alcohol.

Last time he did it by video on the club website, and this time he went further by acknowledging his alcohol issue.

"Together with the club I'm working on a solution to address these issues and it will come out in the next couple of days." 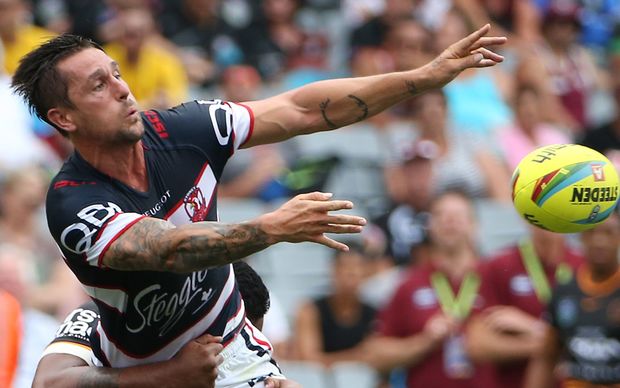 The NRL is under pressure to deregister Pearce over the latest incident and he has been stood down by the Roosters in the wake of the scandal as the club and NRL decide how to deal with their troubled star.

Pearce's comments suggested he could undergo an alcohol rehabilitation program and it's likely he will at least face a lengthy suspension and a hefty fine as well as losing the Roosters co-captaincy.

He also risks being banished from the Blues Origin team again.

Two years ago Pearce was axed from coach Laurie Daley's New South Wales side after being arrested for failing to leave a Kings Cross nightclub.

Pearce had been asked to leave after management received complaints about Pearce's behaviour toward a women in a yellow dress.

After that incident Pearce promised to mend his way and described it as a much-needed "kick up the backside".

The NRL's adviser on women's issues Catherine Lumby has called for Pearce's contract to be terminated by the league and has indicated she could quit her role if strong action is not taken.

"At the Roosters we can't accept that - we won't - but over the next couple of days we'll come to a conclusion with the NRL," Robinson said on Thursday.