The career of Sydney Roosters halfback Mitchell Pearce hangs in the balance after he was stood down by the National Rugby League club for a lewd act during an alcohol-fuelled Australia Day bender. 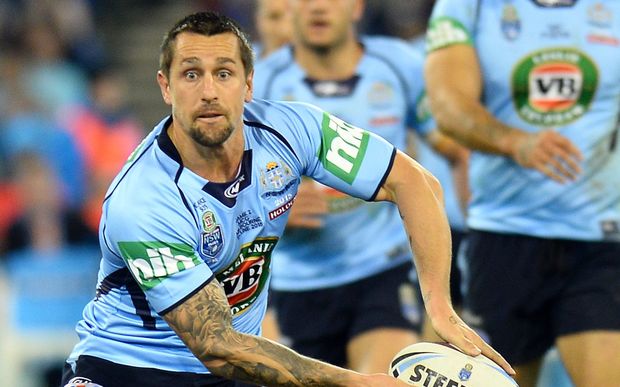 The club said the New South Wales State of Origin playmaker had been stood down from all training and club commitments as it investigated the video in which he was seen to make unwanted advances to a woman, simulate a lewd act with a dog and was accused of urinating on a couch.

Pearce was reportedly set to be stripped of the club co-captaincy, which he shares with hooker Jake Friend, and fined $A50,000.

The NRL was also likely to impose at least a six-month suspension and his club would add an immediate sacking clause to his contract to be triggered by any further misbehaviour, News Corp reported.

He was also expected to be barred from travelling to England next month for the World Club challenge and be given a booze ban.

In the video, a shirtless and intoxicated Pearce can be seen trying to kiss a female, who rejects his advances and clearly states "I am a lesbian", before he kisses her.

Pearce is then seen to simulate sex with the dog.

The woman tells him to stop but Pearce continues to simulate sex with the animal before the woman takes the dog away and tells him to leave.

The woman suggested Pearce had also urinated on her couch.

A Roosters official told News Corp the Roosters would oversee counselling sessions for the 26-year-old halfback and insist he goes on a permanent booze ban.

"Mitchell obviously needs to be severely punished but he also needs professional help", the official said.

"At this stage he'll lose the captaincy, be heavily fined and we won't take him to England."

Club chairman Nick Politis is expected to insert a new clause in Mitchell's contract stipulating if he sets another foot out of line off-field, the Roosters will rip up his existing deal, News Corp reports.

Pearce's suspension would be a big blow for the Roosters following the departure of five-eighth James Maloney to Cronulla.

Rookie Jayden Nikorima, who was signed from Brisbane following the 2015 season, would be the most likely candidate to fill Pearce's shoes.

It would leave the tri-colours short on experience in the halves with 20-year-old Jackson Hastings expected to take over from Maloney at number sic.

This is not the first time Pearce has found himself in trouble because of issues with alcohol.

In 2014, he was dropped by NSW and fined $20,000 by the Roosters after a nightclub incident in Kings Cross where a female patron complained about his advances and he was asked to leave the venue.

After that incident, he went on a self-imposed alcohol ban and was named the Roosters captain the next year as well as earning back his NSW Blues jersey.

The latest episode casts a shadow over his footballing future, especially in the wake of Todd Carney's banishment from the NRL for an alcohol-fuelled incident in 2014 at a Cronulla night spot.

In 2010, Canberra released representative centre Joel Monaghan after a lewd act with an animal during the Raiders' Mad Monday celebrations.

The Roosters announced they would conduct an internal investigation while the NRL awaited a report from the Roosters into the incident.

"The Integrity Unit will work with the Roosters to ensure the matter is dealt with appropriately," read the NRL statement.

The Rugby League Players' Association (RLPA) issued a statement saying it was not appropriate to comment on the circumstances of the case without knowing all the facts but it would provide Pearce with "appropriate wellbeing support as needed".

"RSPCA is appalled by footage showing NRL player Mitchell Pearce engaging in a lewd act with a dog on the night of January 26/27," the organisation tweeted.

"RSPCA is investigating and anyone with additional information is urged to call 1300 CRUELTY."