Play was abandoned for the second one day cricket match between the Black Caps and Pakistan in Napier without a ball being bowled. 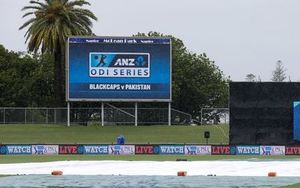 The match, which was due to get underway at 2pm, had been hampered by bad weather.

Steady rain fell throughout the day at McLean Park with surface flooding visible.

The latest time the match could get underway was 7.17pm but a lack of dry weather meant umpires Billy Bowden and Bruce Oxenford decided to call it off early.

The third and final match will be played in Auckland on Sunday.

The Black Caps lead the series 1-0.