Mitchell McClenaghan is expected to miss the remainder of the one-day series (ODI) against Pakistan after suffering an eye injury during the Black Caps' win in Wellington. 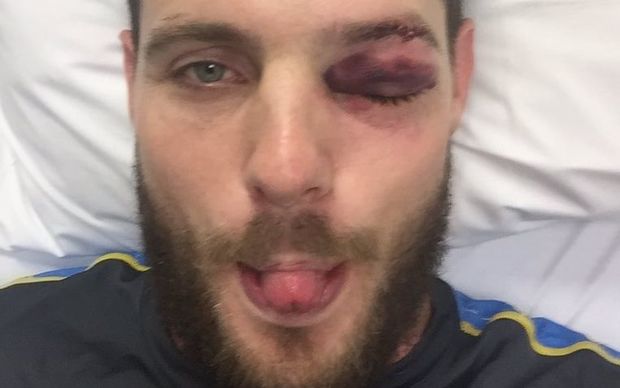 McClenaghan suffered a hairline fracture just above his left eye from a bouncer that went through the gap in his helmet during the final over of New Zealand's innings.

It rules him out of the second ODI in Napier on Thursday, and the third and final match in Auckland on Sunday, as he is scheduled to undergo minor cosmetic surgery in Auckland on Friday.

McClenaghan was batting on 31 from 17 deliveries when the penultimate ball of the innings - from Anwar Ali - squeezed between the peak of his helmet and its grille to strike him flush on the left eye.

He did not bowl in Pakistan's innings, spending most of it in hospital instead. He received stitches on his left eyebrow, but was well enough to tweet an update on his condition and congratulations to his team mates following their victory. "Thanks for all the concerns. Everything is as good as it can be just a few broken bones. Great win for the boys!"

A Black Caps spokesman confirmed that McClenaghan will undergo minor surgery on his eye socket on Friday.

McClenaghan is the fourth New Zealand player to be unavailable for Thursday's game, with Ross Taylor, Brendon McCullum and Tim Southee also out through injury.

The tourists were bowled out for 210 after 46 overs as they chased New Zealand's 280 for eight.

Trent Boult took four wickets for 40 runs, including the final scalp of giant pace man Mohammad Irfan, who he bowled for a duck. 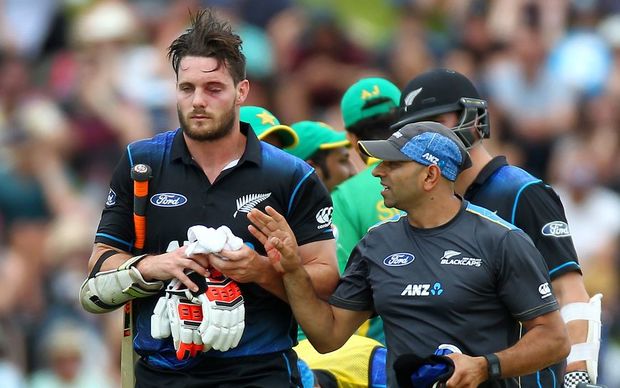 Mitchell McClenaghan is forced from the field injured during the ODI against Pakistan at the Basin Reserve Photo: Photosport

Thanks for all the concerns. Everything is as good as it can be just a few broken bones. Great win for the boys! pic.twitter.com/S9A2pZqETa

The Black Caps made a stunning recovery after losing the toss and being sent in to bat.

They were 99 for six after 22 overs and one ball, before batsman Henry Nicholls made 82 in a crucial 79-run partnership for the seventh wicket with all-rounder Mitchell Santner, who struck 48.

Bowler Matt Henry then chimed in with an unbeaten 48, while Boult hit a four off the only delivery he faced, right at the end of their innings.

Both opening batsmen Martin Guptill and Tom Latham fell inside three deliveries early on for 11. 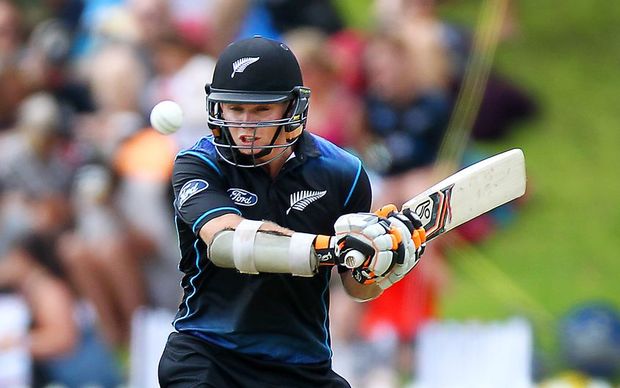 Tom Latham faces down a bouncer in the first ODI match against Pakistan at the Basin Reserve Photo: Photosport

Then the captain Kane Williamson and all-rounder Grant Elliott were bowled, also within three balls, for 10 and a duck respectively.

Corey Anderson was caught for 10 soon after, followed by wicketkeeper Luke Ronchi for just five to have the hosts 99 for six after 21 overs and one ball.

But Nicholls stuck around with Santner and their fortunes turned. Nicholls was named man of the match afterwards. 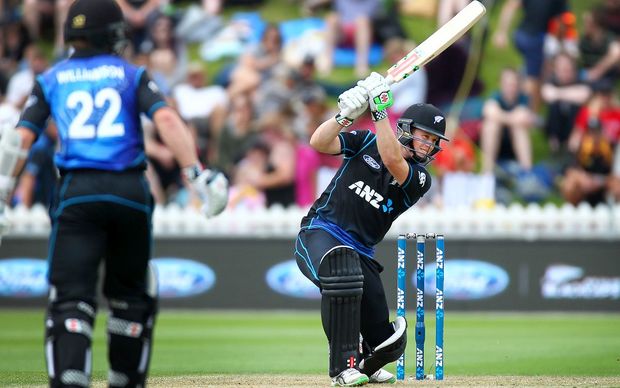 Henry Nicholls was named man of the match Photo: PhotoSport

It wasn't clear until the toss whether Colin Munro or Latham would come into the top order in place of the injured Ross Taylor for the Black Caps.

Taylor suffered a left-side strain during the Black Caps' T20 win over Pakistan in Wellington on Friday.

In the end, Latham came in to open with Nicholls first drop. There was no room for Munro.

The second of the three one day matches is in Napier on Thursday.

Meanwhile, off-spinner Nathan Lyon has lost his place in the Australian cricket side for the Chappell-Hadlee series to be held here.

The in-form batsman Usman Khawaja has also been left out of Australia's 14-man ODI squad.