Japanese rugby bosses received another blow to their reputation after the Top League season opener was played out in front of a half-empty stadium in Tokyo with supporters told the game was sold out and turned away. 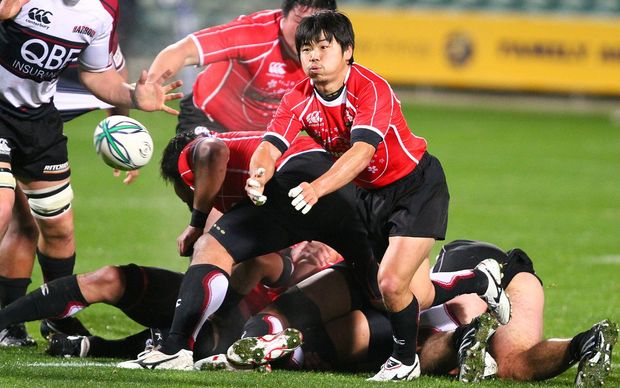 Fumiaki Tanaka, seen here in action for a Japan XV against North Harbour in Auckland back in 2010 Photo: Photosport

The Japan Rugby Football Union had said it had sold around 20,000 tickets for the fixture.

"We've let fans down by declining their entrance with premature judgment. I'm sorry for the players on the pitch too," JRFU executive director Hiroshi Konishi was quoted as saying by Kyodo News.

"We heard it was going to be packed. Honestly it was sad," Tanaka said.

The JRFU should be basking in a successful World Cup campaign last month after the 'Brave Blossoms' won three matches including a shock victory over twice champions South Africa, but once again they are dealing with criticism.

The country will host the 2019 World Cup but has already raised the ire of World Rugby officials after Japanese Prime Minister Shinzo Abe scrapped plans for the new Olympic Stadium, which was due to host the final but will not be ready until after the tournament.

Japan will also enter a franchise into the expanding Super Rugby competition next year but New Zealand Rugby CEO Steve Tew said this week that tournament organisers SANZAR remained "pretty nervous about their readiness" for the February start date.

"They haven't announced a coach yet and haven't got a full player roster," Tew said.