After almost 40 years as a jockey tomorrow's Melbourne Cup race will be the last for New Zealand jockey Jimmy Cassidy.

Cassidy's enjoyed two Melbourne Cup wins, the first of which was on Kiwi which he rode from last to first at Flemmington in 1983.

He also had success on Might and Power in 1997 and will ride British horse Grand Marshal in tomorrow's race.

But his career has also had its lows.

He was suspended for over a year and half for his role in the 1995 Jockey Tapes when he was found guilty of providing tips to a punter who was being taped by police conducting a drugs probe.

Cassidy, who's 52, was again suspended in 2010 after testing positive for cannabis.

But age and personal circumstance have caught up with Cassidy and its time to hang up the reins.

"My dad's not very well...and my wife lost her sister earlier this year so its been a pretty tough year. The body's telling me (it's time). I've got plenty of aches and pains and the quality rides aren't there so its a fitting time," he said.

"I was lucky enough to come on the big stage at Flemmington so it will be nice to leave on that one."

Cassidy said bringing Kiwi from the back on the field to storm home to win the 1983 Melbourne Cup was the making of his career and opened a lot of doors on the Australasian racing scene.

He's one of the few jockeys to chalk up 100 Group One winners. 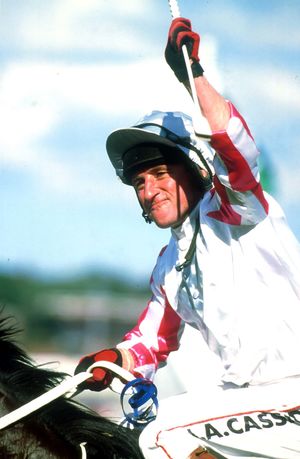 Jim Cassidy after riding Might and Power to Cox Plate victory in 1998. Photo: Photosport

"I dreamed about riding horses and I've been lucky to be part of a great industry."

A tough industry though, Cassidy agrees.

The bottom came in the mid-nineties when he was caught on tape by police passing on information to a punter.

"There's always tough times in life but I bounced back and got back on top...you got up and down in life and that's just the way mine has been, but I'm very happy and very proud."

Winning is what Cassidy will miss the most.

"Coming back to the winner's stall, that blood rushing through your veins, all the good things about being a jockey and winning. I'll certainly miss it but I've had a lot of fun.

"I'm looking foward to walking onto Flemmington ..it'll be said being my last one but I'm proud to be have been in the game so long," said Cassidy.