The New York Mets climbed back into the World Series with a 9-3 victory over the Kansas City Royals in game three. 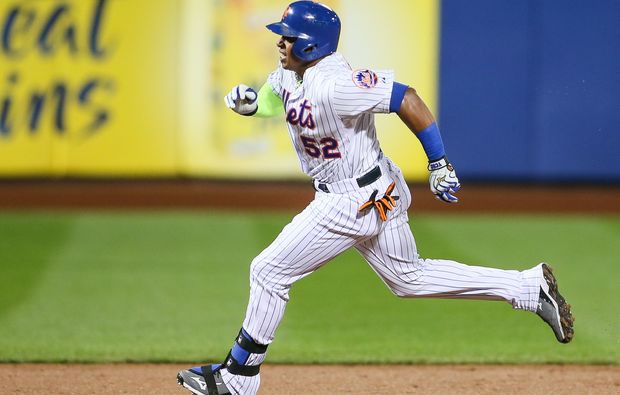 Lifted by the roars of the home crowd, a pair of two-run home runs and gritty pitching by rookie Noah Syndergaard, the Mets narrowed the deficit in the best-of-seven 'Fall Classic' to 2-1.

Captain David Wright blasted a homer in the bottom of the first off Yordano Ventura to give New York a 2-1 lead, and after the Royals scored two runs in the second, Curtis Granderson hit a shot over the right-field fence in the third for a 4-3 lead.

A four-run outburst in the sixth, helped along by some sloppy Royals fielding, put the game out of reach.

The Mets, the National League champions, will try to square the series in Game Four in New York on Saturday.

The home team set the tone on the first pitch of the game.

Syndergaard's 98-mph fastball high and inside to Alcides Escober, who has feasted on first-pitch fastballs, dropped him to the dirt and triggered angry barking from the Royals' dugout.

Syndergaard went on to strike out Escobar with a 99-mph blazer, the first swing and miss at a fastball since Game One by Kansas City, who were the best team in Major League Baseball at hitting high-velocity fastballs.

Ben Zobrist followed by smacking a double off the centerfield wall, moved to third on an infield roller that eluded Syndergaard for a hit and scored on Eric Hosmer's grounder.

After the see-saw scoring in the early innings, Granderson's two-run shot gave the Mets the lead for good.

"The big thing early on, even though they scored runs we knew we had opportunities," Granderson said. "We were starting to get to the starting pitcher there."

Syndergaard, whose pounding fastball and long blond locks have brought him the nickname "Thor", retired 12 batters in a row before running into trouble in the sixth on an infield single and a pair of walks that loaded the bases.

But with the tying run on second, Syndergaard got Alex Rios to ground out to short to end the threat.