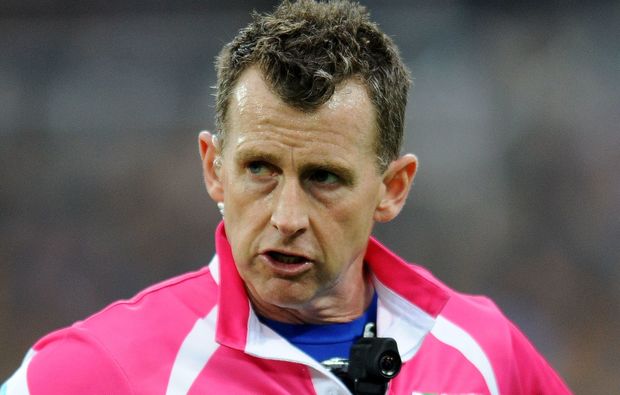 Owens was named by World Rugby this morning as the referee for the title decider.

The 44-year-old had been widely tipped for the role following his impressive displays throughout the tournament.

Owens, who was named "Gay sports personality of the year" in 2007 shortly after coming out, has won admirers on and off the pitch for his light touch and humour, as well as his rapport with the players.

"This is a huge honour and a privilege for me," Owens said this morning before what will be his 68th Test.

"I am humbled to have been chosen. This is my third World Cup and I think it has been the best. It has been inspirational. The quality of rugby on display has been incredible in front of packed venues and so to be given the opportunity to referee the final match between the best two teams in the tournament is an amazing honour."

"I would like to thank World Rugby and the Welsh Rugby Union for their support over many years. There have been so many individual people throughout my career who have helped and supported me along the way and while I can't name everyone here, I will be thanking everyone personally in due course."

"I want to thank my friends and family for their ongoing support and for helping me through some rough times in my life."

"My dad, in particular, is always there for me and is delighted with this news -- it's just a shame my mother is not here to see this as she was a pillar of strength for me. She passed away six years ago and I know she would have been very proud."

Jerome Garces of France and England's Wayne Barnes will be the touch judges with Shaun Veldsman of South Africa taking the role of television match official.

The referee for Saturday's third place playoff between South Africa and Argentina at the Olympic Stadium will be John Lacey of Ireland.