The Wallabies coach Michael Cheika said his team could improve again for next week's Rugby World Cup final against New Zealand after they scored four tries in beating Argentina 29-15 in the second semi-final at Twickenham. 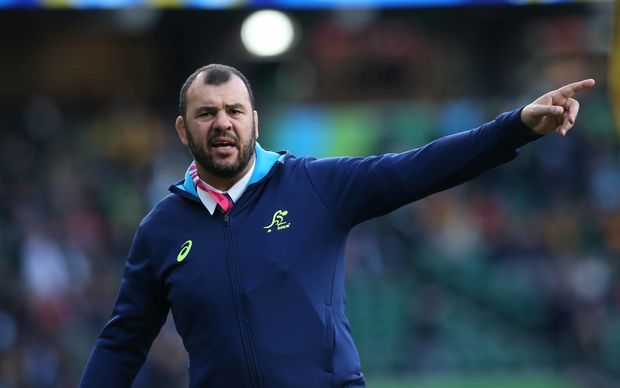 "We had to work hard to stop them scoring a try so I'm really happy with our defence," Cheika said.

"We gave away too many penalties in the first half but tried to rectify that in the second.

"Overall, I'm happy we scored four tries, I think we can improve again, and that's important."

Asked about the first final between the trans-Tasman rivals, Cheika said they'd only been thinking about the semi-final.

"We've now given ourselves the chance to play in the World Cup final against a pretty dynamic team."

Captain Stephen Moore said it was a tough game and they knew it would be.

"We had to defend a lot... We have an opportunity in a final now. That took a fair bit out of the tank. We know the task next week is huge and we'll have to play really well."

Winger Adam Ashley-Cooper was the star man with a hat-trick of tries but also credited his side's defence as key.

"We knew they would play from everywhere in the field and they did that tonight," Ashley-Cooper said.

"Our defence was huge right across the park. The defensive line was really strong."

Australia's brilliant No.8 David Pocock showed the signs of battle with blood streaming from his nose.

"It was incredibly tough - as we knew it would be," he said.

"Credit to Argentina - it was physical - but both teams looked to use the ball and both teams were working hard until the 80th minute.

"I thought there were a few pieces of finishing from our back line which was the difference, but it was tough."

"We were not so great tonight but I want to thank all the people," he added.

"They defended well in the second half. We wanted to win, and we are very sad we didn't do it today.

"We have a young squad. We knew we had a team to reach the final, so we're doing great."

"In the first five minutes we were 14 points down," he said.

"It was very tough for us to come back. We tried everything but just could not score tries. Australia defended very well. We made some mistakes that put the team under pressure."