All Blacks coach Steve Hansen says his South African counterpart is playing mind games in the build-up to their Rugby World Cup semi-final clash at Twickenham on Sunday. 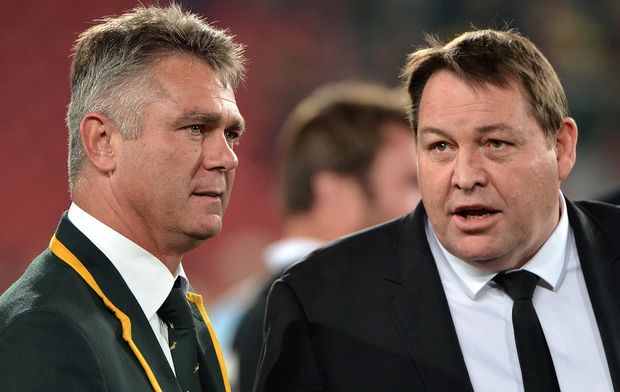 Hansen has made just one change to the starting XV for the match, with Joe Moody replacing the injured Wyatt Crockett at loosehead prop.

There has been plenty of talk about mutual respect between the All Blacks and South Africa this week, leading up to the most important meeting between the two sides since the infamous 1995 World Cup final.

After naming an unchanged starting side for the match, Springboks coach Heyneke Meyer called this All Blacks side the greatest team of all time and spoke of the special relationship he had formed with rival coach Steve Hansen.

He said a tradition had been started between the pair since they first met in a match.

"First time I lost I was very down and Steve came over, that's the great thing about rugby, I didn't know him and he bought me a beer," said Meyer.

"He said 'I know how you feel and I know the pressure on you, just have a beer with me' - and I really respect that.

"So I said 'the first time I beat you, I'll you a case of beer'. We've got a tradition now, so hopefully on Saturday I can beat him and bring him a full case of beers."

However friendly their relationship might be, Hansen remains wary of Meyer's kind words.

He said the praise for the All Blacks was a deliberate tactic from the Springboks coach.

"He's a cunning wee devil is Heyneke, he's been praising us all week," Hansen told reporters.

"While I know he means some of it, at the same time I know they're getting ready to rip our heads off and we need to get in that same state."

"If we get caught up lapping up all that praise then we won't be in the right mental state to play."

While the match may not be as physical as the coach suggests, the Springboks have long based their game around their strong forwards who will try to out-muscle the All Blacks and control the pace of the game.

Lock Brodie Retallick said they were well prepared for that style of play and could match them in that area.

"They've come out in the media and said that's what they're going to do [play with physicality], so that's what we expect them to do," he said.

"That's the type of rugby they're playing at the moment so we've got to step up and it's going to be a challenge, but I think it's something the forward pack's looking forward to."

The All Blacks are well aware of the buzz their 62-13 demolition of France has created among fans back home after a nervy start to the tournament.

Dan Carter especially received plenty of hype after turning in a vintage performance, but says the side has already moved on.

"My mate Aaron Smith has been moaning all tournament about having a sore back from carrying me all World Cup so it's about time I had a decent game," he says.

"But you talk to all your mates and I'm just sick of hearing about it to be honest, you're wanting to focus on this week and not look back."

Wyatt Crockett, meanwhile, is expected to be fit for the next match, but the Chiefs prop Pauliasi Manu is travelling to the United Kingdom on stand-by.