OPINION: It was 10 minutes into the match when All Black Brodie Retallick placed his face in the ball's path. It was a wonder he could smile at all. But what a smile.

He re-gathered the ricochet 30 metres from the French line and started pumping those long legs. Five metres out a spectacular thing happened - his entire body lit up with joy; he looked, frankly, like a six-year-old. A big, very happy one.

I have watched the GIF above over and over again. Why? Because it is charming. People enjoying what they do is.

Retallick's smiling presence was a standout for me from the Rugby World Cup quarter-final demolition of France. It said something about the All Blacks, who haven't always been known for openly enjoying what they do.

Retallick urges teammate Julian Savea over the line during the quarter-final. Photo: SUPPLIED

Just last year, captain Richie McCaw said in an interview with The Guardian that the country's expectations could be suffocating.

"Rather than fear of failure, it feels like a weight on the shoulders. When each week if you win you think: 'Oh, thank goodness,' and move on to the next one; I've felt like that at times."

It is something he canvassed a bit in his autobiography, The Real McCaw, where the pressure and emotional toll come to the fore.

McCaw's former All Blacks coach Graham Henry wrote during the week that the match had buried the French demons from the 2007 loss. But his point was richer than that.

"Sure they get paid well and they [the All Blacks] have the kudos that recognition and success bring, but material things don't supply the motivation for these extraordinary standards, the desire to play with such sublime skills and frightening intensity. It simply comes down to the love of playing this great game.

"It's like when they were young boys and they couldn't wait to wake up on a Saturday morning and go down to the local park and play with their mates," Henry said. 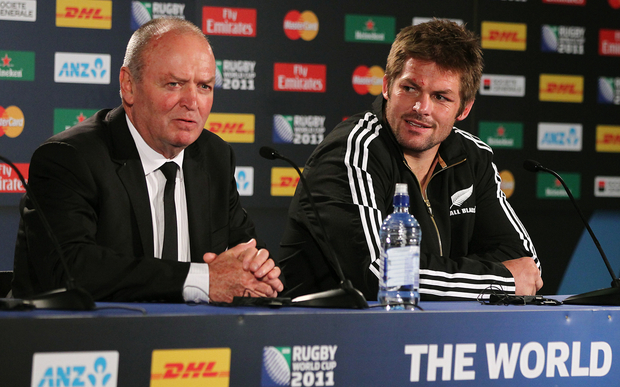 Graham Henry and Richie McCaw talk to the media after a pool match against France in the 2011 Rugby World Cup. Photo: PHOTOSPORT

That's what it felt like on Sunday. The All Blacks threw off the shackles and embraced their rugby joie de vivre. It echoed the feeling in New Zealand earlier this year as the Black Caps treated the Cricket World Cup like a continuous backyard bash.

Like their smaller ball compatriots, the All Blacks now face South Africa in the semi-finals. The Black Caps, of course, triumphed in the final over at Eden Park. They were jubilant, delirious moments. A lesson in how the country could let go and really enjoy itself.

McCaw and All Blacks coach Steve Hansen both spoke following the destruction of France of looking forward to Sunday's match against South Africa. Hansen went as far as saying we "really enjoy their company". It was done with genuine warmth.

Gone, hopefully, are the days of the "unsmiling giants", as the All Blacks have often been labelled.

I'd be delighted to see Retallick's broad smile again this weekend. It will get me smiling too.