Ireland suffered a massive blow on the eve of Monday's Rugby World Cup quarter-final against Argentina when flyhalf Johnny Sexton was ruled out with a groin injury. 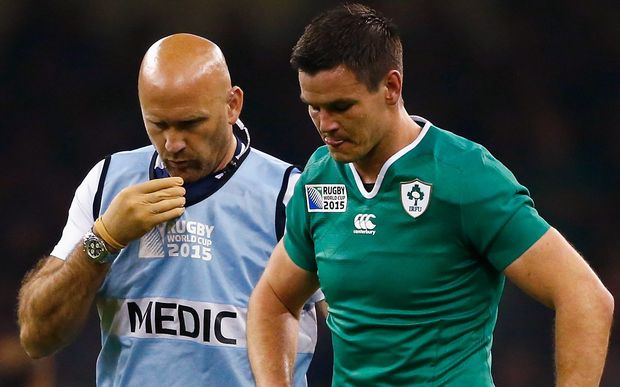 Sexton had been named in the starting lineup despite limping off the field in last weekend's pool match against France but felt discomfort after training on Friday.

Sexton was sent for scans which revealed he had a minor abductor strain, prompting team officials to withdraw him from the match and replace him with Ian Madigan.

"Post training yesterday Johnny Sexton tightened up and although scans earlier in the week were normal a further scan yesterday afternoon revealed a very minor adductor strain," the Irish Rugby Football Union said in a statement.

"It was therefore felt that it was better to withdraw him from the game rather than risk further injury. Ian Madigan will start at out-half and Paddy Jackson comes on to the bench."

Scrumhalf Isaac Boss has been brought in to the squad as extra cover for Jared Payne as Madigan had also been the back-up scrum-half behind Conor Murray and Eoin Reddan.

The loss of Sexton is the latest setback for an Ireland team bidding to reach the World semi-finals for the first time.

"They're all guys you'd like to have in your squad but that's the nature of the game," Ireland's stand-in skipper Jamie Heaslip told a news conference.

"Guys get banged up and you just gotta play with the hand you're dealt with.

"But it doesn't change the game plan at all. I think you saw last week when Johnny came off after 20-25 minutes, Ian stepped in and we all get the same game plan that we've run through during the week."