The All Blacks have beaten France 62-13 in their Rugby World Cup quarter-final in Cardiff. 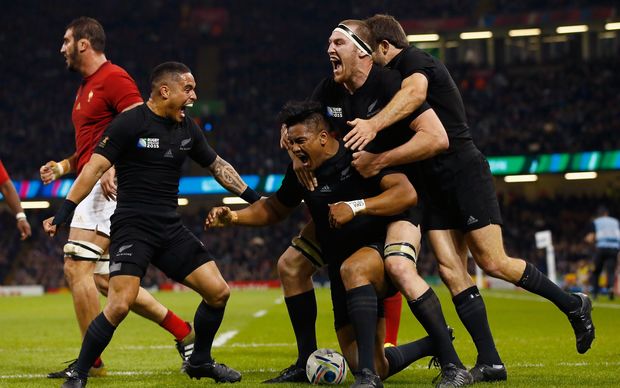 They will meet South Africa in the semi-finals in London next weekend.

Look back at our live blog here

The All Blacks turned on a spectacle under the roof at the Millenium Stadium scoring 9 tries in what was their highest ever score against France.

The All Blacks may have been holding back in pool play, but they certainly let it all out today right from the first whistle.

They scored four first half tries to lead 29-13 and added another 5 after the break with Julian Savea scoring a hat-trick to become the joint highest try scorer in a World Cup with 8.

The other tries went to Tawera Kerr-Barlow with two and one each to Brodie Retallick, Nehe Milner-Skudder, Jerome Kaino and Kieran Read.

Dan Carter kicked the rest of the points.

Louis Picamoles scored a first half try for France.

Our rugby reporter says it was a complete game by the All Blacks, high in intensity and skill.

Afterwards captain Richie McCaw said he was very happy that they were able to lift their intensity and performance up another notch especially at the start of the game.

In an aftermatch interview coach Steve Hansen said "It was a very, very pleasing performance, everyone from one to 23 brought something to the game and it was nice to get a little monkey off our backs."

New Zealand will play South Africa in the last four at Twickenham.

"We can't wait for the semi-finals, South Africa are a great team and we enjoy playing them," Hansen said.

"Congratulations to New Zealand," he said. "The fans are disappointed like us, but we did the maximum we could do, we worked hard over the last three months, but New Zealand punished each of our mistakes.

"They are the Brazilians of rugby, congratulations to them."

Milner-Skudder and Wyatt Crocket left the field with injuries.

The other quarter-finals are tomorrow with Ireland playing Argentina and Australia playing Scotland.