Folau and Pocock were given until today's naming to prove their fitness, but failed to convince coach Michael Cheika in a late fitness test that they'd overcome ankle and calf complaints respectively. 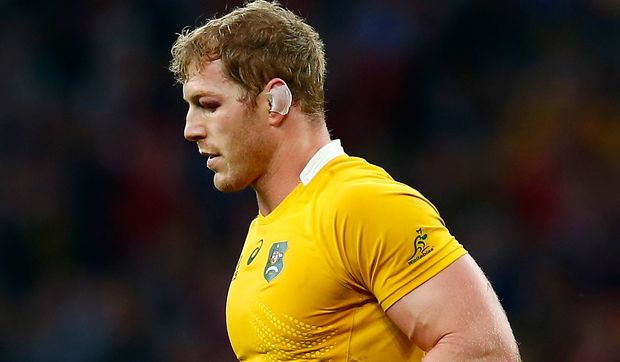 David Pocock of Australia leaves the field during the 2015 Rugby World Cup Pool A match between Australia and Wales. Photo: Getty Images

Losing both your best forward and most potent back would have crippled Wallabies teams of previous years, but Cheika was confident in what replacements Kurtley Beale and Ben McCalman would bring for the clash at Twickenham.

The loss of Pocock - an outstanding ball-hunter who leads the tournament in turnovers with ten and is among the Wallabies' top three for tackles, carries over the gainline and offloads - is somewhat offset by the return of fellow specialist No.7 and vice-captain Michael Hooper from suspension.

However, as the star of the pool stages following his transition from openside flanker to standout No.8, Pocock's absence is an enormous blow to Australia's chances of reaching the final four at the tournament.

The 27-year-old also produced the performance of his life at this stage four years ago, when he made 26 tackles and nine turnovers in the Wallabies gutsy 11-9 win over South Africa - despite Australia enjoying just 24 per cent of possession.

Despite the loss, Cheika backed McCalman to step up to the task as he has done throughout the World Cup so far.

"He probably hasn't been too pleased he hasn't been getting as many starts as he'd like."

McCalman's brilliant cameo off the bench in the victory over Wales, where the Wallabies stoically defended their own line for a 13 minute period which included seven minutes with two men sin-binned, sealed his place ahead of young gun Sean McMahon, who had started at No.7 against Wales.

"(Against Wales) he didn't go on when we were down numbers, he was out there and we went down numbers," Cheika said.

"He knew he was fresher so he lifted himself and his work off the ball to cover one-and-a-half spots if he could in the defensive line."

Folau has been hampered since rolling his ankle against England a fortnight ago and played through pain against Wales, but despite showing improvements early in the week it was felt he shouldn't be risked.

It ends Folau's streak of never having missed a Test through injury in his 36-Test career.

In the final change to the starting XV which beat Wales, Cheika has again switched up his locks - with lineout caller Rob Simmons recalled following a strong performance off the bench to take the place of Dean Mumm, and partner with Kane Douglas.

Quade Cooper joins the bench to cover first-ffive-eighth and fullback, and will be tasked with replicating the energy Beale has brought this tournament.