South African icon Nelson Mandela has been posthumously inducted into the World Rugby Hall of Fame. 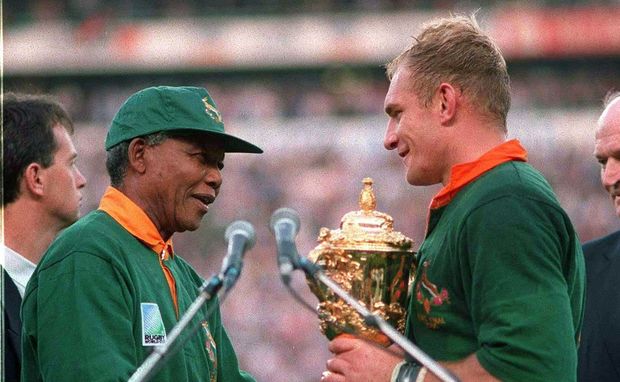 The image of the black then South African president dressed in a Springbok team shirt handing over the 1995 World Cup trophy to white Springbok captain Francois Pienaar is perhaps the most enduring image of the sport's showpiece event.

The symbolism of the moment appeared to reflect a unity within the rainbow nation - replacing the racist apartheid regime - especially as rugby was seen as the one of the last bastions of whites.

His induction took place at a special ceremony in Newcastle ahead of the Springbok game against Scotland.

"The World Rugby Hall of Fame recognises those who have made an indelible mark on our sport through feats on the field of play, displays of great character or through their tireless and inspirational work in driving forward our great game," commented Lapasset.

"Mandela certainly fits in that category. He was instrumental in turning Rugby World Cup 1995 into a momentous occasion that united the South African nation through the power of sport.

"By supporting the Springboks so passionately and publicly on their way to victory, Mandela helped to change attitudes, soften hearts and convince minds of the right course of history for his country to take and, in the process, became a wonderful example to us all.

"Now, 20 years on from that historic tournament, we are delighted to induct the former president into the World Rugby Hall of Fame.

"It is a fitting tribute to a man who did so much for his country and our sport."

"Madiba was a great man of vision, determination and integrity who performed a miracle that amazed the world as much as it amazed his fellow countrymen," said Hoskins.

"His name will rank among the greatest humanitarians and this induction reflects rugby's ever-lasting friendship and appreciation for a great man."

Despite the memorable moment in 1995, the problem over black representation in the Springboks' team still rages, with present coach Heyneke Meyer being accused of doing the bare legal minimum to select them.