The embattled Australian Rugby Union (ARU) has been given a boost with the Wallabies fullback Israel Folau signing a three-year extension to his national contract. 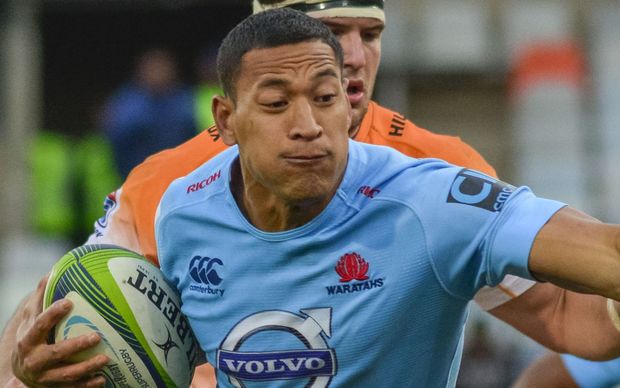 A flock of seasoned Wallabies will leave for foreign shores after the World Cup in England later this year and dual international Folau, the jewel in the crown of Australian rugby, had been tipped to join them.

However, despite being linked with a lucrative move to French giants Toulon and a second stint in the National Rugby League (NRL), the explosive back decided to remain in Australia until the end of 2018, though on a flexible contract that permits him to pad out his salary by playing in Japan.

"First and foremost, it was how I felt on the footy field," the 26-year-old Folau told reporters in Sydney on Wednesday.

"I really enjoy playing the game. Hence why I decided another three more years but just overall as a package... the game on and off the field has been great for me.

"The community have embraced me a lot and that's something that I've really enjoyed."

Folau's contract will also keep him at Super Rugby's New South Wales Waratahs until the end of 2018.

The news will please fans who have been dismayed by reports of financial strife in local rugby in recent years and been forced to watch a procession of homegrown talent head overseas chasing big-money deals.

Folau was tight-lipped about his plans for Japan but hours after his media conference, Osaka-based NTT Docomo Red Hurricanes announced his signing on their website for the 2015 season along with South Africa lock Eben Etzebeth.

The Wallabies coach Michael Cheika was instrumental in bringing Folau to the Waratahs in 2013 from under the noses of a number of NRL teams, who had hoped to swoop on the player after his unsuccessful two-year stint in Australian Rules football.

Folau paid tribute to the 48-year-old, who stepped down as Waratahs coach over the weekend after their exit from the Super Rugby semi-finals.

"He has created a culture that is extremely hard to walk away from, but just as importantly, it's an environment which challenges you every day to be a better player and person," Folau said.

Folau's decision comes as another blow to the NRL, which nurtured him as a teenage prodigy and set up a warchest to lure him back to the 13-man code.

While his ARU contract will ensure he remains one of the country's best-paid footballers, Folau conceded it would rule out a bid to win a medal at the Rio Games when sevens makes its Olympic debut next year.

The Sydney-born son of Tongan parents, Folau scored two tries on his 2013 Wallabies debut against the British and Irish Lions and now has 17 from his 29 caps.