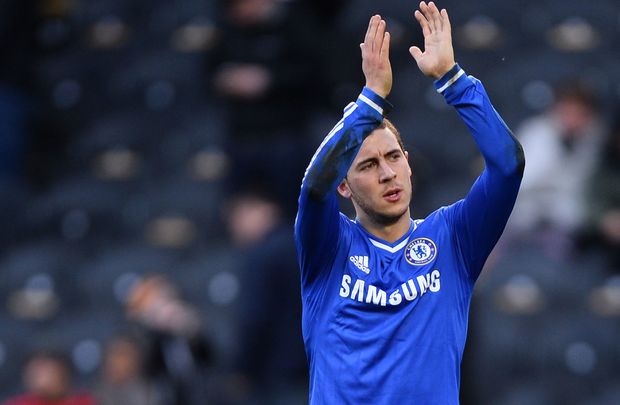 The Belgium winger provided an effortless finish in the 38th minute, side-footing the ball between the legs of keeper David de Gea from close range to grab his 13th league goal of the season.

The 24-year-old Hazard has contributed eight goals and seven assists in his last 17 league matches and was unlucky not to add a second goal against United when he flicked the ball against the bar in the second half.

As has been the case on numerous occasions this season, it was the quicksilver playmaker who provided the difference in a close match.

Hazard's attacking brilliance was matched only by his work ethic and willingness to commit everything to the cause as Chelsea defended stoically in the face of intense pressure.

Often it was the Belgian who broke up United's possession to snuff out danger before dashing clear, leaving red jerseys in his wake, to create chances at the other end.

If ever a performance provided evidence that 'defence is the best form of attack' it came from Hazard and his effervescent counter-attacking.

Manager Jose Mourinho, who has publicly endorsed his playmaker as the league's best player, was elated by Chelsea's ability to execute their plans and paramount to that was his number 10.

"The game was exactly what we were working for the game to be," the Portuguese told reporters.

"The players were magnificent and at the top of that Eden had that magic that the top ones have, especially in big matches.

"I think the team was fantastic and I am the one who knows how fantastic it was because the game was exactly what we wanted. When you manage to play the game you want to play it is fantastic."

Chelsea have built a seemingly unassailable 10-point lead over second-placed Arsenal but he continues to take the title race one hurdle at a time.

"We need eight points to be champions and football is not about if or almost, it is about mathematics," said Mourinho. "When mathematically it's done, it's done and we celebrate."