Team Wellington have made a dream start to their Oceania Champions League campaign with a 2-1 victory over 2012 runners-up, Tahiti's AS Tefana in Suva, Fiji. 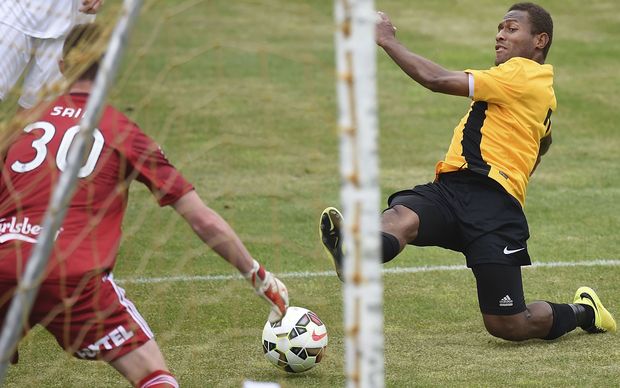 Taking the first 20 or so minutes to settle into their new surroundings, Team Wellington was soon creating chances of their own, with Solomon Islander Henry Fa'arodo using his skills to cause havoc.

After winning possession in the 36th minute, Team Wellington directed their attentions to the Tefana goal as Costa Rican Luis Corrales found a way past goalkeeper Stevens Hiriga to claim the first goal - and first on-target shot - of the game.

The goal seemed to inject a sense of comfort into the side from New Zealand's capital, with the pressure on Tefana's goal increasing with every attack.

However after conceding a free kick in what appeared to be a comfortable distance from danger, Team Wellington found themselves back on equal ground.

The free kick effort was lofted long into the penalty area, and when Wellington's keeper Michael O'Keeffe thought he'd punched it clear from danger, it actually looped backwards into his own net.

A disappointing goal to concede with just a minute until the half-time break, meaning the two teams were locked at 1-1 when they returned for the second period.

The second half got a bit rougher, with some heavy challenges resulting in cautions for both sides - with Wellington's Ian Hogg seemingly lucky not to face heavier punishment for a challenge which left Tefana's Sylvain Graglia in a writhing heap.

Poor communication proved the downfall for Tefana as Team Wellington substitute Jarrod Smith took advantage of some slow decision making to poke the ball past Hiriga to return the lead to his side.

Despite some inspired attacks, pulling themselves back in line for a second time proved too hard a task for this Tefana side and allowing Team Wellington to breathe easy, with the full three points claimed.

"The boys fought really well and they finished strongly as well so all the things we've been working on over the last couple of days have been put into plan tonight and it was a very pleasing start, a difficult start, but a very pleasing one," Team Wellington coach Matt Calcott said.

"Obviously we conceded a pretty soft goal and let them back in it, but from our side I thought we pressed a lot better in the second half, we had our chances which was great, and then we dropped off and killed the game quite well and that was good to see."