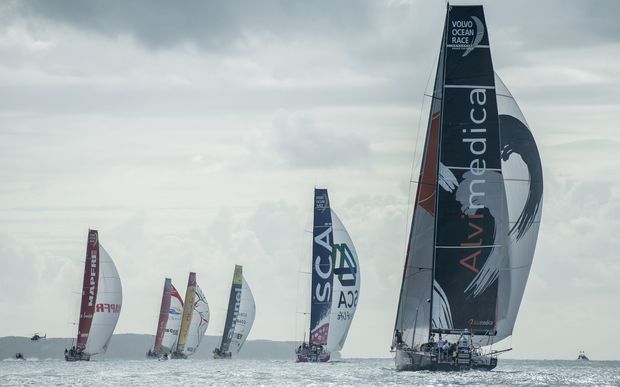 The Volvo Ocean Race fleet head out of the Hauraki Gulf at Auckland bound for Itajai, Brazil. Photo: PHOTOSPORT

The all-women's crew of Team SCA (Sweden), Dongfeng Race Team (China) and MAPFRE (Spain) all suffered 'Chinese gybes' - with the boats briefly tipped on their sides - during 12 hours of drama as they headed towards Cape Horn.

Another competitor, Abu Dhabi Ocean Racing, also endured a drama-filled night, reporting "a massive wipe-out", although it was not pitched on its side in the same way as the other three.

No injuries from any of the crews were reported although the boats were assessing how much damage had been done in the incidents after they were returned upright.

"Due to a big wave, our boat was completely lying on its side," MAPFRE's onboard reporter Francisco Vignale wrote in a message to shore.

"We were on deck and it was I who was closest to the water. Xabi (Fernandez) grabbed my jacket and helped me get out of this terrible situation."

Charles Caudrelier, the French skipper of Dongfeng, also gave a graphic description of the toppling of his boat.

"This will be a great and amusing story to share over a beer or to my grandchildren in a few years' time - but last night it was hell," he wrote.

A Volvo Ocean Race spokesman says "it was real mayhem" for a while." But fortunately, none of the sailors was hurt. All four boats were later able to return to sailing through the most treacherous waves encountered since the six-strong fleet set off in Alicante last October."

Team Alvimedica (Turkey/US), another boat to stay upright throughout, were third, 28.8 nautical miles adrift of Brunel, with MAPFRE, Dongfeng Race Team and Team SCA trailing them.

The boats are still expected to arrive in their leg five destination, Itaja+, Brazil, around April the 4th, having left Auckland, New Zealand, on March the 18th.

In all, they will cover 38,739 nautical miles, visiting 11 ports and every continent.

There are nine legs in all.