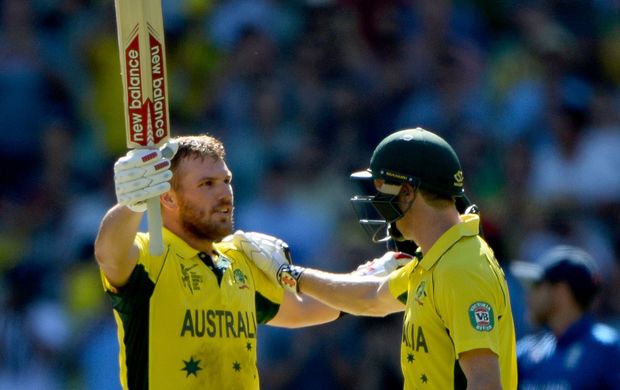 Dropped on the second ball he faced, opening batsman Finch blasted 135 at his home ground to lay the platform for victory as the co-hosts piled on 342 for nine, two runs shy of the venue's one-day international record.

All-rounder Mitchell Marsh then took a career-best 5-33 as Australia put on a ruthless Valentine Day's display in the field that amplified the abysmal nature of their opponents' earlier efforts.

Having reprieved bulky opener Finch, England let a string of chances go begging, dropping catches and missing run-out opportunities to set a miserable tone for the start of their campaign.

They had reduced Australia to 70-3 but released the pressure and Australia's formidable batting line-up duly went into punishment mode.

Ironically, Steven Finn, who like his colleagues had been thrashed to all corners of the ground, became the first England bowler to take a World Cup hat-trick by dismissing Brad Haddin, Maxwell and Mitchell Johnson in the last three balls of Australia's innings.

He finished with a hugely expensive five for 71 and seemed embarrassed by his achievement.

It was to be a brief moment of celebration for the English, who were all but beaten by the 18th over of their chase, when captain Eoin Morgan flailed at a slower ball and was well-caught by wicketkeeper Haddin.

Morgan's sixth-ball duck was his fourth in five innings, including the last warmup against Pakistan, and left England reeling at 73 for five.

Diving low and to his left, Smith showed marvellous anticipation to snaffle a full-blooded slog, a high point in a sparkling effort in the field for the hosts.

Marsh was also the third bowler of the match to take wickets in consecutive balls, with Broad also missing a hat-trick after bowling opener David Warner for 22 and having Shane Watson caught behind for a golden duck.

James Taylor (98) and Chris Woakes (37), who spilled a simple, head-high chance at midwicket to reprieve Finch in the first over, dug in for a 92-run partnership to flatter England's scoreline.

The match ended in an odd manner, with Taylor initially given out lbw. He successfully had the decision overturned on review but was denied the chance of a century after a second review showed Maxwell had thrown down the stumps with James Anderson short of his ground.

For Australia, the only blot in a dominant display was Watson's failure to score or take a wicket and a dropped catch by Finch when Taylor was on 20.

Long a contentious selection, the bulky Queenslander's place in the side is certain to come under heavy scrutiny as regular captain Michael Clarke prepares to return for the second match against Bangladesh on the comeback from hamstring surgery.