The Wellington Phoenix have won the race to sign young New Zealand-born winger Kwabena Appiah from the Western Sydney Wanderers.

Appiah was being chased by a couple of other A-League football clubs, thought to be the Central Coast Mariners, where the 22-year-old was part of the junior team that won the National Youth League in 2012, and the Newcastle Jets.

But it was the Phoenix who got his signature for this season and the next.

Appiah played in the Asian Champions League final for the Wanderers, who won that title, and he's a pacey attacking player who is eligible for both the All Whites and Socceroos after living in Australia since the age of six. 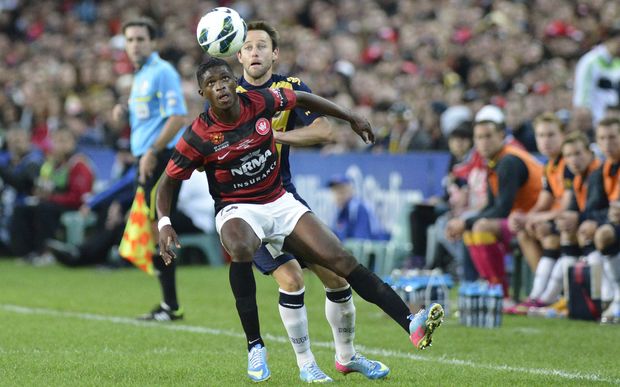 Born here to Ghanaian parents, Appiah trained with the Phoenix for three days last week after his contract was terminated by mutual consent at the end of January. As he's now off contract, he was available to be signed even though the transfer window has closed - and as a New Zealand-eligible player, Appiah doesn't come under the import quota restrictions for the Phoenix.

Appiah says he likes the way the Phoenix coach Ernie Merrick has the team playing. "It is exciting," Appiah says. "I can't wait to be a part of it and the boys made me feel welcome right from the start."

"Ernie Merrick has a reputation for developing young players such as Robbie Kruse and Marco Rojas and I look forward to developing my game working with him."