Middlesbrough have been rewarded for beating Manchester City with a trip to FA Cup holders Arsenal while Chelsea's conquerors Bradford City host Sunderland or Fulham after the fifth round draw was made. 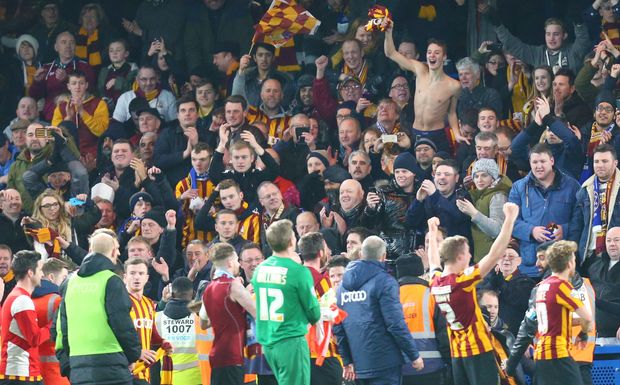 Bradford trailed 2-0 against Premier League leaders Chelsea before mounting a stunning fightback to win 4-2 while Middlesbrough outplayed City to claim a 2-nil victory at the Etihad Stadium.

Bradford co-chairman Mark Lawn told Sky Sports he'd prefer to play Sunderland to be fair. But he says as they're at home they have a good chance, and he thinks they can win at home.

Lawn says when they get their stadium bouncing he doesn't think any team will want to come there, and whether it's Sunderland or Fulham, they won't want to come to Valley Parade.

In other ties Manchester United face a trip to Preston North End or Sheffield United should they overcome fourth tier Cambridge United - the lowest-ranked side still in the competition - after they forced a heroic replay against the 11-time winners.