The All Blacks front rower Charlie Faumuina says to be the number one prop in the country is a big motivation for re-signing with the Blues and New Zealand Rugby for another two years. 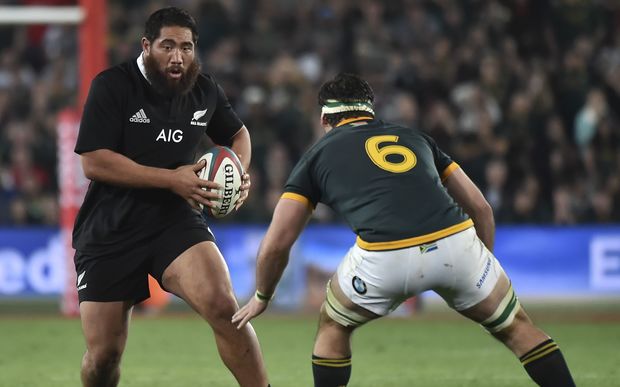 All Blacks prop Charlie Faumuina in action against the Springboks 2014. Photo: PHOTOSPORT

Twenty eight-year-old Faumuina, who can play both sides of the scrum, has signed on until 2017.

He saysFaumuina will help anchor the strength of the All Blacks' front row and leadership group beyond this year's World Cup.

This week the All Blacks' prop Ben Franks confirmed he will be moving to England to play for London Irish after this year's World Cup.

Faumuina says anchoring the All Blacks front row is a big target for him.

"To be the number one prop I guess that's probably one of the biggest goals, I know Franksies [Ben Franks] been there a long time and I respect him a hell of a lot but yeah obviously that's a goal and that's something that I'll just keep pushing."

Faumuina admits French clubs chased pretty hard to get him signed post this year's World Cup but he's happy with his decision.

"You know a lot of money getting thrown around but yeah I think just looking at the bigger picture like this is where I'm from, my family's here. Obviously there's a big team coming here in 2017 and that's probably another big factor something to tick off in my rugby career. A long time to think about it but happy with my decision."

Faumuina says long term, he is looking forward to the prospect of playing in the British and Irish Lions tour in 2017, which only comes around every 12 years.

Blues coach John Kirwan says Faumuina is a true Blues man who has run out 61 times since his debut in 2009.