The Auckland Aces and Otago Volts are the only unbeaten teams left in the domestic one-day competition after the second round. 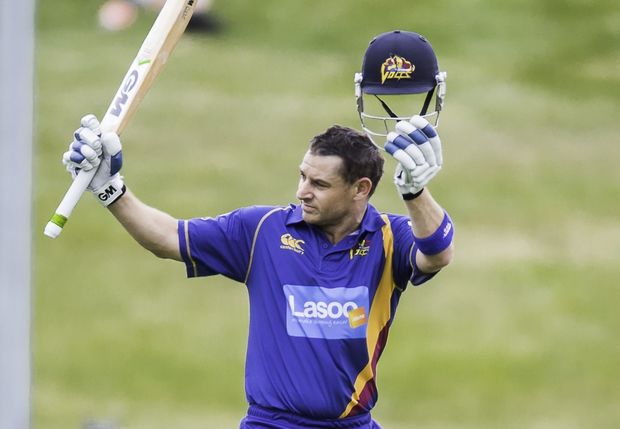 Nathan McCullum lifts his bat after scoring a century in the domestic one-day competition. Photo: PHOTOSPORT

The Volts' 16-run win over defending champions the Wellington Firebirds in Queenstown was set up by Black Cap Nathan McCullum, who scored his maiden List A century and took three wickets on his 100th appearance in the competition.

His score of 119 from 109 balls and record 150-run partnership for the fifth wicket with Iain Robertson helped the Volts rally to 286 for eight, after having been in trouble at 65 for four.

All-rounder Grant Elliott impressed with the ball taking four for 46, while captain James Franklin battled to an unbeaten 98 in the chase.

The Firebirds' impressive response of 270 for eight was not enough for their first win of the season.

At New Plymouth's Pukekura Park, the Central Stags suffered their first loss of the competition after the Northern Knights successfully defended 297 for nine.

At Eden Park's outer oval, the Auckland Aces cruised to a comfortable seven-wicket win with almost 17 overs to spare after Canterbury suffered a dramatic collapse in the first innings.

Canterbury had been well-placed at 127 for two after winning the toss, yet were rolled for 199 with Cricket World Cup squad contender Mitchell McClenaghan picking up four wickets.