Young captain Steven Smith compiled a watchful half-century to guide Australia to 259 for 5 at stumps and leave the third cricket test against India delicately poised after an attritional opening day in Melbourne. 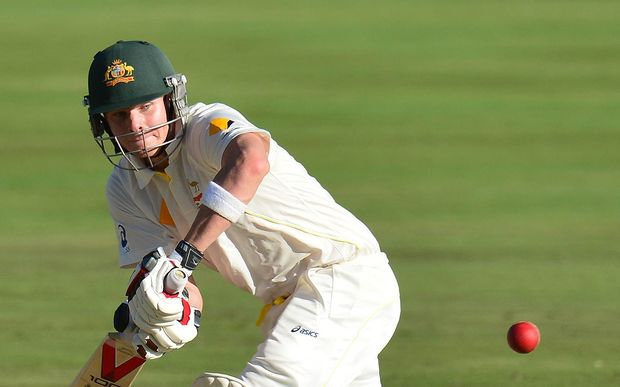 Smith won the toss and put his team in to bat but the hosts were on the back foot for much of a mild, sunny day in front of a festive Boxing Day crowd of 70,000.

Continuing a stellar run of form, Smith was unbeaten on 72 at stumps, with Brad Haddin surviving a couple of body blows from India's pacemen and clutching to a scratchy 23.

Smith and middle order batsman Shaun Marsh resumed after tea with Australia on 174-3, but Marsh was out quickly for 32 with a rash front-foot swipe at paceman Mohammed Shami that gave an edge to India wicketkeeper and captain Mahendra Singh Dhoni.

Where Smith never really appeared under great threat, the out-of-form wicketkeeper Haddin was under the gun constantly from India's pacemen but gritted through the final overs to ensure the hosts lost no further ground.

Australia's batsmen may be disappointed with their return, however, with several making starts and only Smith holding hope of cashing in.

Opening batsman Chris Rogers and Shane Watson raised half-centuries soon after lunch but were both out within minutes of each other early in the middle session.

One ball after a mix-up over a single, Rogers was dismissed by paceman Shami for 57, nicking an edge to Dhoni behind the stumps.

Watson was the architect of his own downfall, however, trapped lbw by Ravi Ashwin for 52 when trying to sweep the spinner a few balls later.

Under pressure after a string of low scores, the all-rounder failed to make India pay after being dropped in the slips by Shikhar Dhawan on 37.

Yadav dismissed opening batsman David Warner for a duck in the second over but India squandered their strong start with poor fielding as the hosts pushed to 92-1 at lunch.

Dhawan caught Warner well in the slips but made a hash of Watson's chance before lunch, diving across from second slip and juggling the ball twice before it grounded, much to the delight of most of the MCG crowd.

Australia are bidding to seal the four-match series 3-0 after winning the opening tests in Adelaide and Brisbane.

India made two changes, with the out-of-form Rohit Sharma dropped in favour of debutant batsman Lokesh Rahul and Shami coming in for paceman Varun Aaron.