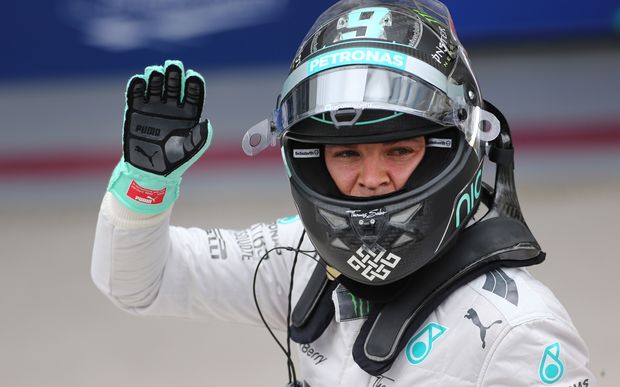 Williams drivers Valtteri Bottas and Felipe Massa failed to split the leading two but could still play a big part in Sunday's season-ending 'duel in the desert' with their cars right behind on the second row.

Hamilton, hoping to become Britain's first multiple champion since Jackie Stewart in 1971, leads Rosberg by 17 points but the double points on offer means Sunday's winner will take an unprecedented 50.

The Briton, world champion with McLaren in 2008, was fastest in the first two phases of qualifying but a messy lap in the tense final shootout left him unable to deny Rosberg his 11th pole of the 19-race season.

The pole was the team's 18th of the campaign, with Brazilian Massa taking the one that got away, and ensured Mercedes became the first engine manufacturer to take every pole in a season since Ford in 1969.

"It's only one step, a very small step," commented Rosberg, who needs someone to get between him and Hamilton in the race to have a chance of winning the title if neither Mercedes has mechanical trouble.

"This weekend is about the championship, not about pole position. It would have been great if there was a Williams in between us, but that can always happen tomorrow.

"All I can do is try to go for the win and keep the pressure on," added Rosberg.

Hamilton, winner of 10 races this year to Rosberg's five but under increasing pressure, has said he wants to take the title with a win and looked unhappy at the outcome.

"I generally didn't have the best of laps but I enjoyed the qualifying session," said the 29-year-old. "Tomorrow is going to be a special day."

Outgoing Formula One champion Sebastian Vettel and Australian team mate Daniel Ricciardo were sent to the back of the grid at the season-ending race after stewards ruled Red Bull had used an illegal front wing.

FIA technical delegate Jo Bauer had referred the matter to the race stewards after post-qualifying checks indicated the cars were not in compliance with technical regulations.

He reported that the front wing flaps were designed to flex under aerodynamic load, in a breach of the rules.

The stewards summoned a Red Bull representative and subsequently ruled that the cars should be excluded from the qualifying results.

Neither driver is in contention for the title but Ricciardo is the only driver other than Mercedes pair of championship leader Lewis Hamilton and team mate Nico Rosberg to have won this season.