Five second half tries have helped the All Blacks to a 34-16 win over Wales at Cardiff's Millennium Stadium, the victory marking Richie McCaw's 100th test as captain. 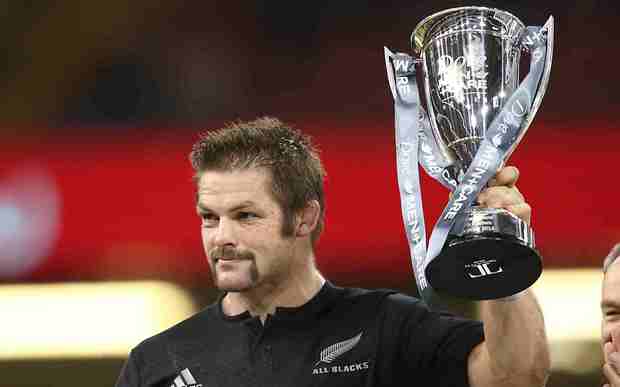 All Blacks' Richie McCaw with the trophy for winning the match. All Blacks vs Wales. 2014. Photo: PHOTOSPORT

A tense first half provided few tryscoring opportunities for either side, with the teams trading penalties to end the first stanza level at 3-all.

The All Blacks were the first to score in the second spell with wing Julian Savea crashing over and first-five Beauden Barrett duly converting.

The conversion was successful and Wales added another penalty soon after to wrest back the lead.

The All Blacks then scored through flanker Jerome Kaino to go ahead 15-13 with about 12 minutes remaining.

Wales though weren't done, first-five Dan Biggar adding another penalty within minutes to give the hosts a 1 point lead 16-15.

Barrett, who had moved to fullback with Colin Slade coming on at first-five, then provided the match defining moment, re-gathering his chip and chase inside the Wales 22 to score for the All Blacks and put the tourists back in front.

Number eight Kieran Read scored soon after to break any Welsh resistance before Barrett bagged his brace, his second try putting the result well beyond doubt, the final score 34-16.

Slade was successful with two of the three conversions he attempted.

The All Blacks ran in five tries in the end to Wales one, all of which were scored in the second half.

McCaw says he always had faith the All Blacks would win, despite a tough and tense first half against the Welsh.

The victory means the All Blacks finish their end of year tour unbeaten, following wins over the United States, England and Scotland.