The New Zealand cricketers continue to press home efforts for a series-levelling win, but the honours are even after four days of the second Test against Pakistan in Dubai.

Ross Taylor hit a return-to-form half-century to help the Black Caps through to 167 for six in their second innings for an overall lead of 177. 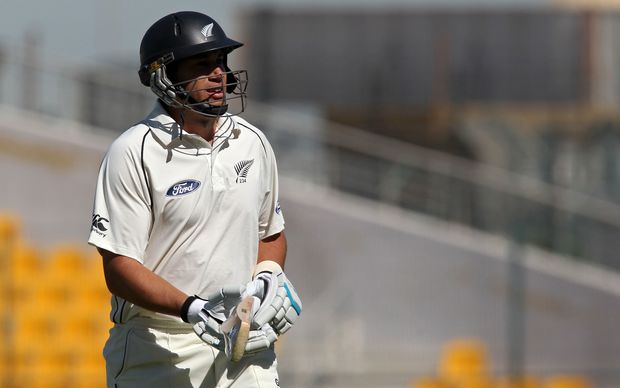 Ross Taylor walks back to the pavilion after his unbeaten 77 Photo: PHOTOSPORT

After starting the day on 281 for six, Sarfraz Ahmed hit a fighting hundred for Pakistan as the hosts ended their first innings on 393, just 10 runs behind.

Taylor is unbeaten on 77 as he helped his team recover from a shaky 79 for four.

Mark Craig (nought) was in Taylor's company as New Zealand will seek a series-levelling win in the three-Test series on an intriguing final day.

Babar removed Brendon McCullum (45), Kane Williamson (11) and Jimmy Neesham (11) in another display of beguiling left-arm spin on a Dubai stadium pitch which is taking notable turn.

Taylor added 46 with Jimmy Neesham (11) and hit Babar for a boundary to complete his 50 and then added 41 for the sixth with Watling.

The third and final Test begins in Sharjah on November 26th.