Opener Tom Latham struck his second consecutive century to keep New Zealand on course for a big first-innings total on the opening day of the second Test against Pakistan in Dubai.

Opting to bat first after winning the toss, the visitors who trail 1-0 in the three-Test series, reached 243 for three wickets at the close. 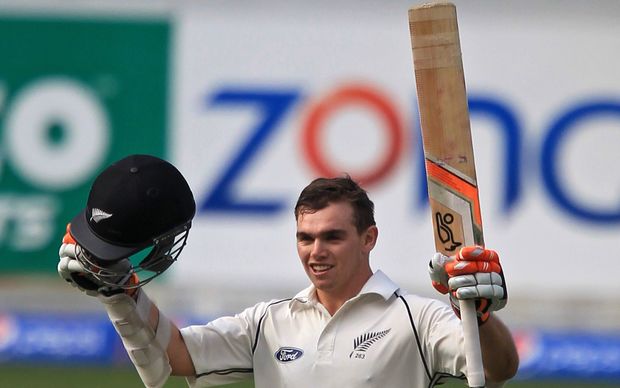 Latham, who scored a century in the first Test in Abu Dhabi, is unbeaten on 137 with Corey Anderson on seven.

The 22-year-old Latham, playing his sixth Test, displayed good temperament and solid technique against both the fast bowlers and the spinners and reached his century with a single off paceman Ehsan Adil.

The left-handed batsman survived a close lbw appeal against Adil on 11 and edged Rahat Ali on 71 but the ball went between the wicketkeeper and first slip.

Azhar Ali dropped Latham at gully after the batsman had reached his hundred and failed to latch on to a sharp chance at silly point off Ross Taylor.

Latham added 77 for the opening wicket with Brendon McCullum before the New Zealand captain succumbed to a rush of blood to be dismissed on 43.

McCullum pulled Adil, playing his second Test match, straight to Shan Masood who was placed at square leg precisely for that purpose.

Latham added 76 for the second wicket with Kane Williamson who fell an over before tea, bowled by left-arm spinner Zulfiqar Babar for 32.

Leg-spinner Yasir Shah dismissed Taylor (23) in the final session but not before he had added 73 for the third wicket with Latham.

Pakistan captain Misbah-ul-Haq introduced spin as early as the ninth over after his pace bowlers failed to make early inroads with the new ball.

New Zealand went into the game with the same XI.