The discovery of a Tau fruit fly in Auckland is extremely concerning and growers and exporters are nervously waiting to see if any more will be found, the horticulture industry says. 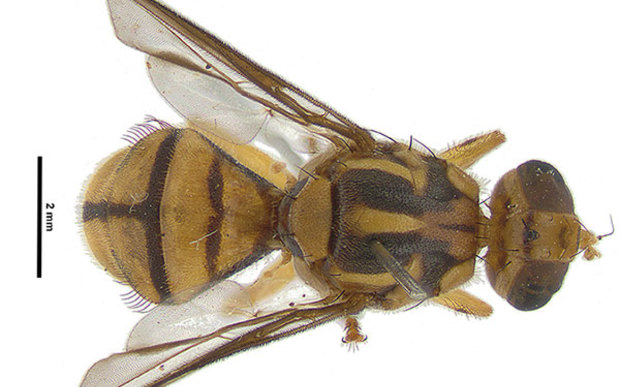 A 1.5km exclusion zone was set up last week around where the Tau fly was found in Manurewa. Photo: SUPPLIED/ Ministry for Primary Industries

One male Tau fly was found in a trap in the south Auckland suburb of Manurewa on Thursday, just weeks after officials finally eradicated the invasive Queensland fruit fly.

The Ministry for Primary Industries (MPI) has set more than 95 traps in the area but said the fly was a tropical species from Asia and was unlikely to be able to establish a population here.

Horticulture New Zealand chief executive Mike Chapman said the fly was attracted to certain crops including pumpkins, capsicum, zucchini and cucumbers. If the species did establish itself here, it could be a billion-dollar threat, he said.

"One Tau fly is of concern. What we are also concerned about is to find out if there are any more.

"Not a lot is known about the fly in terms of the wide range of crops that come into the horticultural industry in New Zealand.

"We do know it's a tropical fly and it does not like the environment in New Zealand; we're just not hot enough. So the chance of the fly establishing itself in Manurewa is remote, but what we've got to find out is there any more flies... That's our key priority."

Horticulture New Zealand was working with MPI to respond to the discovery but it was a matter of wait and see, he said.