When Trade Minister Tim Groser recently described deer velvet as an aphrodisiac, the deer industry was not impressed.

It said Mr Groser's comments were not helpful and had done the sector no favours. 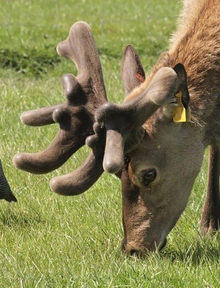 Deer velvet, which is antler that is removed and processed before it calcifies, is popular in oriental medicine.

In the run-up to the signing of the New Zealand-Korea Free Trade Agreement, Mr Groser was pretty clear what he thought deer velvet was used for.

"It's very interesting this deer velvet thing, which as far as I know, is an aphrodisiac. Let's not beat about the bush."

Velvet, he said, is used primarily in oriental medicine to improve immunity, joint health and digestive function - male function as he put it, not so much.

"It's just simply not what it's used for here in Asia. Koreans and Chinese have been using this product for thousands of years and it's a family product," he said.

"It's used for everyone's wellbeing. This sort of pigeon-holing it around male function is inaccurate."

A deer farmer from Hawke's Bay John Spiers weighed in on Mr Groser's comment too.

"Not helpful at all. Certainly not thought of or marketed as an aphrodisiac by the New Zealand industry."

But not long ago, the New Zealand deer sector was singing velvet's alleged aphrodisiac properties from the rooftops.

However, the research flopped and the scientist who conducted it said they had just disproved a 2000-year-old Asian myth.

But it seems not all New Zealand exporters got the results.

Another deer velvet exporter also dismisses those scientific findings: "Is deer velvet an aphrodisiac? While there's no scientific proof that deer velvet is an aphrodisiac, you can't ignore its 2000 year old legacy as a sexual tonic. Chinese medical history abounds with cases where sexual imbalances and problems were successfully treated with deer velvet."

I called Mr Coup and asked him to explain the marketing and the sector's total U-turn on the sexual properties of velvet.

"Some of those small western marketers do trumpet sexual function as one of the benefits of velvet, but for 95 percent of the consumers of velvet, that's not really a priority when they purchase the product."

Mr Coup was unable to explain the deer industry's former enthusiasm for velvet as an aphrodisiac, saying he'd only been with Deer NZ for the last two years.

Still, Mr Groser may have cause to feel a little hard done by.