The Reserve Bank has identified high levels of debt in parts of the dairy sector as a risk to New Zealand's financial system, particularly as falling dairy prices cut farmers' incomes. 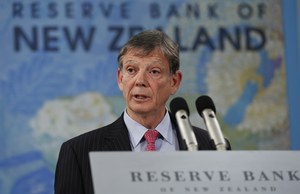 Reserve Bank Governor Graeme Wheeler said about a quarter of dairy industry debt was owed by farmers with debt in excess of $30 dollars per kilogram of milksolids; Fonterra's latest payout forecast is $4.50/kg.

Mr Wheeler said it was a problem because the dairy sector was critical to the economy, with dairy exports accounting for about a third of merchandise exports.

"We've seen a very dramatic decline in dairy prices since February last year, we thought they were picking up, we were encouraged by some of the (dairy) auctions earlier this year and the last four auctions we've seen have been negative," he said.

Meanwhile, dairy debt had trebled since 2003 to about $34 billion

Mr Wheeler said more than 35 percent of farmers would make a loss at the current forecast payout, and those who relied upon imported feed were likely to be particularly hard hit.

Primary Industries Minister Nathan Guy said he knew farmers and banks were concerned about the level of dairy industry debt. However, he insisted the outlook for dairy remained excellent.

"Farmers have always had a bit of debt and in good years they tend to pay it off, so the outlook for the dairy industry is extremely strong," he said.

"Yes it's going to be a bit volatile and bumpy for the next three to six months but it can turn around extremely quickly."

But Agricultural consultant Alison Dewes said it was more like 50 percent of farmers who were currently facing fragile balance sheets.