The farmer owned meat co-operatives Silver Fern Farms and the Alliance Group say they remain open to discussions on restructuring the industry, including merging the two. 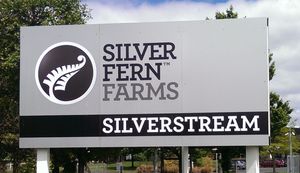 But they said any rationalisation had to be commercially sound, and they can see plenty of hooks as well.

The two companies responded to the new study from the farmer-led Meat Industry Excellence group which was pushing for a major reforms to improve the red meat sector's profitability and lift falling returns to farmers.

An analysis done for the study concludes that merging the two biggest meat companies, the Alliance and Silver Fern Farms co-operatives, would produce gains of more than $400 million over five years.

And getting the big four, that's ANZCO and AFFCO, as well as the two co-ops, to agree to a co-ordinated consolidation process, could mean savings of more than a billion dollars.

Alliance's chairman Murray Taggart said his company wanted to see the detail of the analysis, because its findings were very different from the figures it had come up with on merger benefits.

"The report indicates, on the work they have done, they believe there are very large gains from merging the co-operatives.

"All the work we've done in the past and even recently, indicates the gains are only a fraction of that, so clearly there are significant differences between the two bodies of work and that's why we are pretty keen to have a look at that GHD (international consultancy) report to try and understand how they've come up with such impressive numbers.

"If it stacks up commercially, we will definitely be pursuing any option, whether its merging with Silver Fern or any other company. That's a key responsibility of us as directors to act in the best interests of our company and if the numbers are that compelling, that would be a sensible thing to do."

Silver Fern Farms chairman Rob Hewitt said it was open to rationalisation discussions and they did not just have to be about mergers.

He said it could be about collaborating with other companies to save money by reducing processing capacity.

Both co-operatives agreed that there were too many plants to process the amount of stock available.

But Rob Hewitt questioned the analysis that the industry needed to close about a third of the plants currently operating.

"It's a simple observation and I think mathematically it works, but what it really doesn't take account of its climatic impacts, particularly around shorter seasons as you come further south.

"To give an example, our sheep plants in the south process for about six months of the year. Up north they are pretty much all year and the fixed costs across the number of livestock processed because of that are significantly higher in the south, than they are in the north, and that's a challenge."